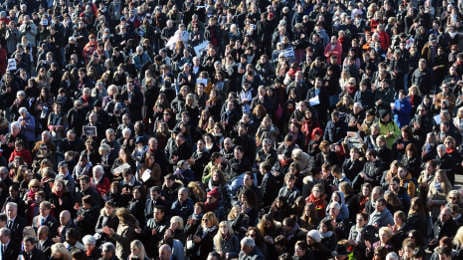 People in Toulouse gather to mourn the victims of the Charlie Hebdo massacre. Photo: AFP

The bloodbath on Wednesday saw two gunmen burst into the Paris office of satirical magazine Charlie Hebdo, shoot a maintenance worker in the reception area, move to the newsroom where they mowed down prominent journalists, a policeman and visitor, and later execute another officer who tried to stop them.

Stunned by the brutality and magnitude of the attack, people around the world poured onto the streets to mourn the victims and leaders from far afield joined together in condemnation, but nowhere was the outpouring of solidarity more acute than in France.

Citizens in their thousands gathered spontaneously across the country in poignant vigils shortly after the attack, and political foes who would normally have met through gritted teeth set their differences aside and held talks.

Nicolas Sarkozy, the head of the opposition UMP party and former French president, met with Francois Hollande in his first visit to the Elysee Palace since handing over power to the Socialist leader in May 2012.

The two warmly shook hands in front of cameras, and Sarkozy later told reporters it had been his "duty" to respond to Hollande's invitation.

He said he was "quite impressed and overwhelmed by the attitude of our countrymen and women and the spontaneous demonstrations of unity.

Perhaps even more unusual in France's cut-throat political landscape was news that Marine Le Pen, head of the far-right National Front party, had been invited to meet Hollande on Friday, as have far-left leader Jean-Luc Melenchon and centrist Francois Bayrou.

Le Pen — whose success in last year's local and European elections has threatened the ruling Socialists and opposition UMP — said Thursday she was waiting for an invitation to join other parties in an official commemorative march due on Sunday.

Charlie Hebdo has long mocked many religions with provocative drawings, a practice that outraged some Muslims in particular, whose religion forbids depictions of the prophet Muhammad.

In a joint statement led by the head of the French Muslim Council, Islamic organizations across France called on the faithful to gather together "in dignity and silence" after Friday prayers to commemorate the victims and urged imams to condemn "violence and terrorism."

"Muslim organizations, deeply shocked and saddened by the assassination of our fellow journalists and policemen, join together… and want to show their national and civic solidarity faced with the magnitude of this tragedy," they said on Thursday.

Television pictures also showed children at a Muslim school in the northern city of Lille holding up sheets of paper with "not in my name".

'Defend our freedoms together'

France has Europe's largest Muslim community, and is also home to the biggest Jewish population on the continent.

Chief Rabbi Haim Korsia, visibly moved, said the attack reminded him of a 2012 assault in the southwestern city of Toulouse that killed seven, including three children and a teacher at a Jewish school.

"We need this time of national unity and we need to defend our freedoms together, including freedom of expression," he said.

On social networks, meanwhile, countless users changed their profile pictures to a black banner with the words "Je suis Charlie" ("I am Charlie" in French) in honour of the victims.

"Thanks for the solidarity," said one user, @AnneBATAILLE, next to a photo of hundreds of people protesting in Paris on Wednesday evening, some carrying signs spelling out "Not afraid."

"They wanted to bring France to its knees, instead it rose up."

Hollande himself, deeply unpopular in the face of stagnant growth and record unemployment, was quick to condemn the attack and called for a day of national mourning Thursday — a rare occurrence in France where it has only happened four times before in the last 50 years.