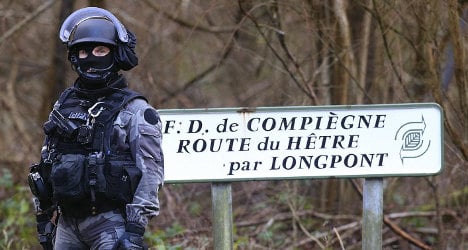 Helicopters buzzed overhead as elite police and paramilitary forces in their hundreds combed through an area in the Aisne region where the fugitives thought to be behind Wednesday's bloodbath were spotted earlier.

Police searched garden huts, garages and anywhere else they could be hiding.

Wearing black bulletproof vests and heavy helmets, the security forces repeated the same routine again and again — four or five of them silently surrounded a building, while two others pointed their automatic rifles, ready to shoot if the suspects tried to burst out.

A cemetery, the banks of a pond… nothing was left to chance as anxious residents of villages and towns on their path looked on, a day and a half after two gunmen burst into the Paris offices of Charlie Hebdo magazine, mowing down 12 people.

On one occasion, 20 heavily armed security force officers surrounded a nearby house and stormed it, while journalists were kept away from the scene.

They were looking for Cherif Kouachi, 32, a known jihadist convicted in 2008 for involvement in a network sending fighters to Iraq, and his 34-year-old brother Said.

'Loads of caves nearby'

"We live next to the forest," said Roseline, a grandmother who lives in the small, picturesque village of Corcy.

"I'm scared, night is falling and they may be hidden nearby."

Michel, a 55-year-old bus driver, said he was also scared. "I've gone round the house, closed the shutters, but there are loads of caves nearby and places where they grow mushrooms," he said, suggesting they were ideal hiding places.

She could not help but compare the protection afforded by the heavy weapons of the police with the helplessness of local residents.

"I don't understand: the police are dressed like Robocops in the streets, but they let us move about freely. What if we came face-to-face with them, what do we do?" she asked.

A student, carrying a GoPro camera and a laptop computer, had ignored warnings from authorities that the men were likely to be "armed and dangerous" and decided to help out in the hunt for the two brothers.

Two drivers get a fright

A maximum security alert declared in the French capital Wednesday had been expanded to the region where Thursday's manhunt was taking place.

"I really want to do something to help, even if I don't have the means to do so. I know they are dangerous people but I don't take that into account," the student said.

He was however able to film the frightened faces of two drivers, stopped by security forces in their Clio car — the same brand as that abandoned by the suspects in the region — and forced to get out of the vehicle with their hands on their head for an ID check.

In the nearby town of Crepy-en-Valois, the continuous flow of security forces sparked a wave of fear and paranoia.

According to witnesses, several shops, including the local supermarket, closed for the whole day or at least part of it over fears owners would find themselves face to face with the fugitives.

"It's especially (worrying) to know they're in the area," said Jonathan, 28, who works in a mobile phone store.

"Are they going to commit suicide and take people with them?"