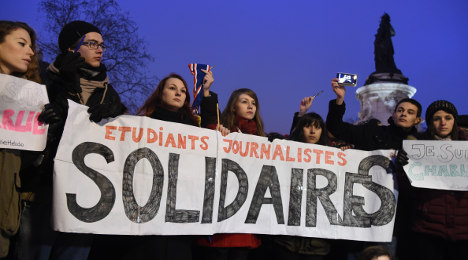 Journalist students at Place de le Republique in Paris rally in support of the victims on Wednesday. Photo: AFP

FOLLOW OUR LIVE COVERAGE OF THE SECOND SHOOTING HERE

In Paris, crowds of people swarmed into the Place de la Republique that lies barely a kilometre (half a mile) from the scene of the bloodbath that has shocked France.

At least 20,000 people also gathered in the French cities of Lyon and Toulouse, police said, after 12 people were killed by heavily armed gunmen screaming "Allahu akbar" (God is greatest).

Demonstrators wore black stickers marked "Je suis Charlie" (I am Charlie),a slogan aimed at showing solidarity with the victims of the deadliest attack in France in decades.

Others waved banners with slogans such as "Press freedom has no price" and "Charb mort libre" (Charb died free), a reference to the newspaper's slain editor-in-chief Stephane Charbonnier.

Charbonnier was one of four cartoonists killed in the attack that also left 11 people injured. "It's terrible that these people were murdered. In future, no-one will be able to speak his mind. We have to demonstrate in our thousands," said Beatrice Cano, a demonstrator in her fifties, who was carrying the latest issue of Charlie Hebdo.

"These people are not religious, they are monsters"

A student named Marie, who is at the protest at Place de la Republique tonight told The Local why she decided she had to attend the spontaneous rally in support of the victims of the Charlie Hebdo shooting.

"We have to show people we are not afraid. We have to defend freedom of speech. We should be able to say what we want.

"We must not attack Muslims because of this. The people behind this attack are not religious. They are monsters."

Other cities around the world were also planning rallies to pay tribute to the dead.