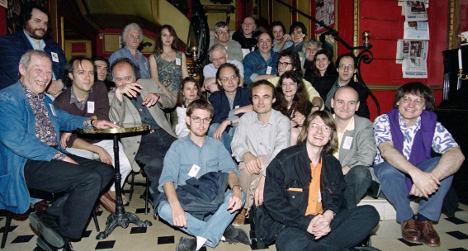 Four of France's most famous cartoonists were among the dozen people murdered Wednesday when gunmen attacked the Paris offices of their satirical newspaper Charlie Hebdo, French prosecutors said.

They included the editor-in-chief of the publication, Stephane Charbonnier, known as Charb.

The other three were: Jean Cabut, known across France as Cabu; Georges Wolinski; and Bernard Verlhac, better known as Tignous.

Also shot dead was popular economist Bernard Maris, 68, not a cartoonist but well-known for his Charlie Hebdo editorials and national radio commentaries.

Here are some details on each of the cartoonists and the other 13 victims that were killed during the bloody attacks: Charb took over the running of Charlie Hebdo in 2009 after joining its staff in 1992. His irreverent caricatures of politicians and other figures mostly appeared in the publication, but also popped up in many other leftwing outlets and outright comics.

He had been living under police protection after receiving death threats for Charlie Hebdo's run of a Mohammed cartoon in 2011, which also saw the newspaper firebombed and its website hacked.

Cabu traced the times he lived in for nearly six decades, sparing no-one and nothing: not presidents, not the military, not religion. In that, he carried on a tradition of French pamphleteers.

Cabu's most enduring creation was the "Beaufs", caricaturing the worst of French complainers, racists and jingoists.

But it was cartoons he did of the Prophet Mohammed for Charlie Hebdo, among his most caustic work, that brought ceaseless death threats upon him and the newspaper's staff.

"Cartoonists live on stupidities and that will never be turned back," he once said.

Wolinski was a legend in French cartooning, with work stretching back to well before Charlie Hebdo's beginning in 1970.

Born in Tunisia in 1934 to a Polish father murdered when he was just two years old, and to an Italian mother from Tuscany, Georgie, as he was called by his grandmother, discovered comic books from US soldiers deployed to North
Africa.

Arriving in Paris at the end of World War II, he started illustrating his high school newspaper and then moved on in 1961 to a publication called Hara Kiri. When that paper was ordered closed by officials, he moved on with its staff to start Charlie Hebdo.

Less well-known than the others, but still very much appreciated in the industry for his corrosive touch and energy, Verlhac had been a cartoonist for the French press since the 1980s. He worked for several other outlets at the
same time as for Charlie Hebdo.

"A newspaper cartoon is extremely difficult to get right because you have to get everything into just one frame. It's the opposite of comics," he once said.

Philippe Honoré, or simply Honoré, may also have been one of the lesser known cartoonists at Charlie Hebdo but he had a long and successful career collaborating with major French publications such as “Le Monde” or “Libération”.

Bernard Maris was a popular economist who wrote a column on economics for the magazine using the pseudonym Oncle Bernard. He was also well known for his national radio commentaries.

According to Le Parisien newspaper, Michel Renaud, the founder of the Clermont Ferrand-based festival of travel journals ‘Rendez-vous du Carnet de Voyage’ was also among the victims.

Renaud and his colleague, secretary general of the festival Gérard Gaillard, were apparently with ‘Cabu’ at the time of the attack. They had been working on something for the magazine’s next issue, Le Parisien said.

The only woman killed was a psychiatrist, who wrote regularly on social issues for the bi-monthly Charlie Divan column.

Mustapha Ourrad was the magazine's proof-reader. The Algerian-born orphan and voracious autodidact worked at a publishing house and for several newspapers before joining the Charlie Hebdo team in 1997.

According to French media, the father of two usually didn’t go into the office on Wednesdays and only came in the day of the attack to work on a special series.

The maintenance worker was employed by the firm Sodexo. According to a statement from the company, he had been with them for 15 years.

Boisseau was shot inside the entrance hall of the building, which housed the Charlie Hebdo offices. He is survived by his wife and his two children, aged 10 and 12.

Franck Brinsolaro was from a special protection service (SPHP) and was in charge of protecting Charlie Hebdo’s editor Stephane Charbonnier, who was killed in the attack.

Ahmed Merabet was a Paris police officer linked to the 11th arrondissement, who was on patrol in the area.

Clarissa Jean-Philippe was a police officer in training when she was shot in Montrouge. Just like the other two policemen, Franck Brinsolaro and Ahmed Merabet, she was appointed Knight of the Legion of Honour after her death.

In addition to the twelve victims of the shootings at the Charlie Hebdo offices and the policewoman who was shot in Montrouge, four people were killed by Amedy Coulibaly during the hostage drama at a Jewish supermarket at the Porte de Vincennes in Paris. They were buried on Tuesday in Jerusalem.

Yoav Hattab came to Paris to study marketing and international business, according to French media. On the side, he worked as a commercial assistant for a small firm. His family lives in Tunis and his father is the headmaster of a Jewish school. In the store Hattab tried to overpower Coulibaly in the supermarket but was gunned down by the terrorist.

Yohan Cohen was born to an Algerian father and a Tunisian mother and worked at the Hyper Cacher supermarket where the hostages were taken.

Philippe Braham worked for an IT consultancy firm. He used to visit the synagogue in Montrouge and the school his children go to isn’t far from where the shooting took place in which one policewoman Clarissa Jean-Philippe was shot to death. According to Le Parisien, one of his friends described him as a “very dedicated person, always willing to help others”.

François-Michel Saada had two children who both live in Israel and was married to his wife for more than 30 years.