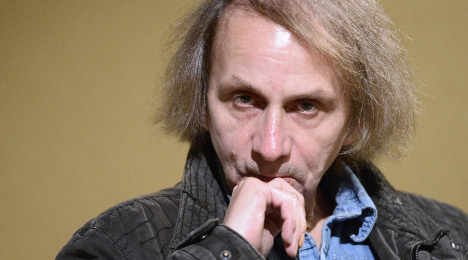 Michel Houellebecq's vision of France in 2022 is likely to cause a stir in the France of 2014. Photo: Miguel Medina/AFP

The Saudis fund the Sorbonne Islamic University in Paris, French primary and secondary teachers have to convert to Islam, and education stops at 11 for girls, who are destined for domestic chores, marriage, and child-bearing.

The state funds only the primary sector, and all education after that is private, with the Gulf monarchies pumping money into Islamic schools, while secular schools slowly wither for lack of funds.

Polygamy is legal, and the removal of women from the workplace means that the country's stubbornly high unemployment finally plummets.

Mohammed Ben Abbes of the Muslim Fraternity party has beaten Front National leader Marine Le Pen to the presidency with the help of the Socialists, the centrists, and even Nicolas Sarkozy’s centre-right UMP.

And the most astonishing aspect of this radically new political landscape is that France – suffering from nervous exhaustion after a decade of Socialist rule under François Hollande, severe economic decline, and the terrifying rise of the far-right – rediscovers optimism and economic growth under the rule of the moderate Islamist president.

Welcome to the fictional future of France as imagined by Michel Houellebecq, who cannot be accused of being a fan of Islam, the religion he once famously described as “cretinous.”

Soumission (Submission), which was published on Wenesday, will confirm the 58-year-old’s position as as one of France’s top provocateurs.

The title itself is a provocation, suggesting a translation of the Arabic word “Islam”, a reference to Islam and the submission of infidels to Allah through conversion to the religion.

As expected the novel has sparked a row in a country where the role of Islam is always a sensitive and highly divisive subject and where a 2013 poll suggested 74 percent of public found Islam incompatible with French values.

It matters little that Houellebecq himself has admitted to the Paris Review that the book's scenario for France is "not very realistic", at least not for "several decades", it has already become a hot talking point.

French President Francois Hollande told France Inter radio on Monday, "I'll read it because it's creating debate," but carefully stressed that it was just "literature" and "the idea of submersion, of invasion, of submission is an old idea".

But others see "Soumission" filling the sails of Europe's far-right.

He has already been accused of buying into the alarmist views of writers such as Renaud Camus, whose “great replacement” theory holds that France is being colonised by Muslim immigrants with the help of the government and the media.

The arrival of the book, said Laurent Joffrin, chief editor of the left-leaning daily Liberation, "will mark the date in the history of ideas on which the ideas of the extreme-right made their entrance in high literature".

The head of France's National Front, Marine Le Pen, told France Info radio on Monday that while the book was fiction, "it's a fiction that could one day become reality".

SEE ALSO: Anti-Islam 'Pegida' protest comes to France, but will it take off?

The narrator of the novel, a typical Houellebecq antihero who drinks too much and has a decidedly unhappy sex life hampered by erectile dysfunction, is a 44-year-old literary professor who specialises in the works of the 19th-century French author JK Huysmans.

He mulls the idea of converting to Islam, which is the only way he can further his university career.

The critics will decide whether the book is a literary success or not, but the description of France – which currently has the biggest Muslim community in western Europe estimated at up to six million people – under Muslim rule is guaranteed to cause controversy.

President Ben Abbes, a shopkeeper's son who studied alongside the French elite at the Ecole Nationale d'Administration, manages to impose his vision on France without any major upheavals,  "presenting Islam as the ultimate form of a unifying humanism."

His economic policy is centred around the "distributivism", an ideology propounded by the English authors GK Chesterton and Hilaire Belloc in which the means of production are spread as widely as possible rather than being centralised under the control of the state or of corporations.

Family businesses are central to the new French economy, which the Muslim president says is entirely in line with the teachings of Islam.

The Muslim Fraternity leader came to power after making it through, alongside Marine le Pen, to the second round of the 2022 presidential election.

The Socialists (whose presidential candidate was Manuel Valls), the centrists and the UMP (whose candidate was Jean-François Copé and not Sarkozy in Houellebecq’s world), desperate to block Le Pen, formed a “republican front” that enabled Ben Abbes to win.

In return he appointed the centrist François Bayrou as prime minister, gave the Socialists half the government ministries, keeping for his own party the coveted education ministry, which he sees as key to enabling him to guide France in the direction he wants.

The French media, which had kept silent about growing ethnic unrest in the banlieues in the run-up to the election, are so stunned by the unexpected turn of events that they are reduced to a sort of stupefied silence.

The initial print run in France for "Soumission" is 150,000 copies, a significant number for the country's market. German and Italian translations of the book will be released mid-January. No date has yet been given for the English-language version.

Houellebecq is clearly enjoying the attention his sixth novel is getting, although he states that he is politically "neutral" in the debate around it.

"Today, atheism is dead. Secularism is dead. The (French) Republic is dead," he told the French news magazine L'Obs in an interview to be published Thursday.

"The Muslims are… closer to the right, even to the extreme right," he argued.

"Who can they vote for, the Muslims of France? They can't vote for the (ruling) Socialists who put in place gay marriages. They aren't going to vote for those on the right either, who want to kick them out. The only solution then is the establishment of a Muslim party."