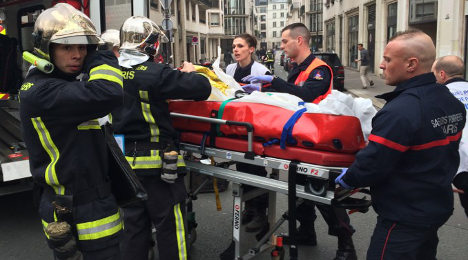 "I strongly condemn the horrific shooting at the offices of Charlie Hebdo magazine in Paris that has reportedly killed 12 people," Obama said.

"Time and again, the French people have stood up for the universal values that generations of our people have defended.  France, and the great city of Paris where this outrageous attack took place, offer the world a timeless example that will endure well beyond the hateful vision of these killers."

The Queen has sent this message to @fhollande and the people of France following the attack in #Paris today pic.twitter.com/ohqvDEQhTj

"The murders in Paris are sickening. We stand with the French people in the fight against terror and defending the freedom of the press," David Cameron said in a message on Twitter.

"We stand in solidarity with the people of France against this evil terrorist attack by people intent on attacking our democratic way of life and freedom of speech," Mr Miliband said.

British-Indian writer Salman Rushdie paid tribute to the work of satirical French magazine Charlie Hebdo following a deadly attack on its offices Wednesday, saying religion must be subject to satire.

Rushdie was forced into hiding after Iran issued a death sentence on him for allegedly insulting Islam with his 1988 book "The Satanic Verses".

"I stand with Charlie Hebdo, as we all must, to defend the art of satire, which has always been a force for liberty and against tyranny, dishonesty and stupidity," he said.

"'Respect for religion' has become a code phrase meaning 'fear of religion'. Religions, like all other ideas, deserve criticism, satire, and, yes, our fearless disrespect."

"I was shocked to learn of the despicable attack on the newspaper in Paris," the German leader Angela Merkel wrote in a condolence letter to President Francois Hollande.

"I would like to express to you and your compatriots in this hour of suffering the sympathy of the German people as well my own sorrow, and convey my condolences to the victims' loved ones," she said.

A Kremlin statement said the president "harshly condemned this cynical crime and confirmed his readiness to continue active cooperation in the battle against the threat of terrorism."

Putin "expressed his deep condolences to French President Francois Hollande," the Kremlin said. "He passed words of sympathy and support to the relatives and loved ones of those who died as well as wishes of a speedy recovery to all those who suffered from the hands of extremists.”

"The European Union stands beside France after this appalling act. It is a brutal attack against our fundamental values and against the freedom of expression, a pillar of our democracy," the former Polish premier said in a statement.

"The fight against terrorism in all its forms must continue unabated."

"This is an intolerable act, an act of barbarism which challenges us all as human and Europeans," Juncker said in a statement, expressing "highest solidarity" with France.

Reactions from The French Government

“No barbaric act will ever extinguish the freedom of the press. We are a united country that will react as one.”

"The goal of ours is to ensure the security of the French people at all points throughout the territory," he said, before confirming that the terror alert had been raised to maximum.

"All the means of the government have been mobilized so that the investigation unfolds rapidly, and so that we can identify the perpetrators and arrest them so that they are punished with the severity that their barbaric act deserves," Cazeneuve, said.

Reaction from the Arab World

In a separate statement to AFP, Al-Azhar senior official Abbas Shoman said the institution "does not approve of using violence even if it was in response to an offence committed against sacred Muslim sentiments".

The current rector of the Grande Mosque in Paris DALIL BOUBAKEUR:

"This attack is against all our values. We are absolutely horrified and stupified by this crime. We are entering an extremely dangerous situation in Paris when violence is becoming a part of daily life," he said.

"I send my sympathies to the families of the victims," he said. "I am very angry. We must avoid at all costs equating these barbarians with the majority of Muslims.

"If you don't agree with Charlie Hebdo cartoons then you should respond with your own cartoons, not with blood and hatred.”

Samy Debah, president of the Collective against Islamaphobia in France (CCIF)

He fears that there will be retribution against innocent Muslims.
"After the victims of this attack, the next victim will certainly be a Muslim," Debah, who strongly condemned the terrorist attack, told The Local.
"Muslims in France have nothing to do with these attackers. We are not responsible, neither individually or collectively".
Url copied to clipboard!