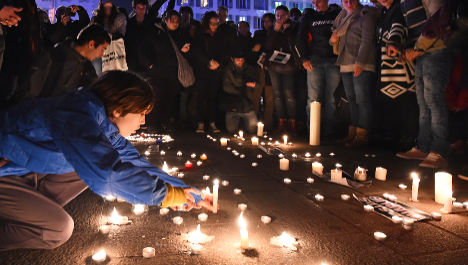 People gather to light candles under large mirror panels on the Old Port of Marseille, southern France, on January 7, 2015, following an attack by unknown gunmen on the offices of the satirical weekly

Heavily armed men shouting "Allahu akbar" stormed the Paris headquarters of a satirical weekly on Wednesday, killing 12 people in an attack that brought more than 100,000 protesters onto streets
across France.

The assault on the Charlie Hebdo headquarters, the worst attack in France in decades, sparked a massive manhunt as the two gunmen in black commando gear escaped, executing a wounded police officer with a shot to the head.

The men remained on the run late Wednesday, with few clues on their whereabouts and parts of the French capital in lockdown.

The attack sparked global outrage and demonstrations of solidarity in several cities across Europe.

Many protesters in France carried banners reading: "I am Charlie" and the hashtag #JeSuisCharlie was trending worldwide including in Arabic.

Charlie Hebdo gained notoriety in February 2006 when it reprinted cartoons of the Prophet Mohammed that had originally appeared in Danish daily Jyllands-Posten, causing fury across the Muslim world.

The killers screamed "we have avenged the prophet, we have killed Charlie Hebdo" according to prosecutors.

'Could they come here?'

The drama began in broad daylight in a quiet Paris street when the masked gunmen stormed into the weekly's offices as the journalists were in an editorial meeting, first shooting a receptionist.

They picked off eight journalists, including some of France's best-known cartoonists, a security guard and a visitor. One person survived by hiding under a table.

Chilling amateur video footage shot after the carnage then showed them outside, running toward a wounded policeman as he lay on the pavement.

One attacker says "you wanted to kill me?" before shooting the officer execution style.

Large numbers of police and ambulances rushed to the scene and shocked residents spilled into the streets. Reporters saw bullet-riddled windows and people being carried out on stretchers.

Prosecutors said 11 people were also injured in the attack, with four in critical condition.

One man who witnessed the attack described a scene like "in a movie."

"I saw them leaving and shooting. They were wearing masks. These guys were serious," said the man who declined to give his name. "At first I thought it was special forces chasing drug traffickers or something.

Authorities said their cold and calculating manner suggested they had been well-trained.

An employee at a nearby daycare centre said he was walking with children when panic erupted.

"People leaned out of the window and yelled at me to get off the pavement," he said.

"We got out of there very fast," said Jean-Paul Chevalier, 56. "People were panicking. I heard shooting."

French authorities placed the Paris region on its highest alert level and beefed up security with soldiers deployed at major transport hubs.

The attack took place at a time of heightened fears in France and other European capitals over fallout from the wars in Iraq and Syria, where hundreds of European citizens have gone to fight alongside the radical Islamic State group.

Some shoppers flocking to the first day of the winter sales voiced the fears of a nation: "Have we got them yet or are they still at large? Do you think they could come here?"

Jitters were also felt in other capitals, with a media group's office in Madrid evacuated later in the day after a suspicious package was sent there.

US President Barack Obama led the global condemnation of what he called the "cowardly, evil" assault.

Saudi Arabia, the home of Islam's holiest sites, condemned "this cowardly terrorist attack which is incompatible with Islam".

The imam of Drancy mosque in the northern suburbs of Paris, Hassen Chalghoumi, visited the scene, calling the shooters "barbarians, they lost their soul, sold their soul to hell".

"They want terror, they want fear. We must not give in, we must all be strong. I hope the French will come out in solidarity and not against the Muslim minority in Europe."

The attacks revived fears of a return to the dark days of the 1980s and 1990s when France, which is home to Europe's largest Muslim population, was hit by a wave of extremist violence.

In 1995, a bomb in a commuter train blamed on Algerian extremists exploded at the Saint Michel metro station in Paris, killing eight and wounding 119.

Al-Qaeda inspired gunman Mohamed Merah killed seven people in and around the southern city of Toulouse in 2012. His victims included three French soldiers and four Jews — three children and a rabbi.

Hollande called for "national unity", adding that "several terrorist attacks had been foiled in recent weeks".

He called for a day of national mourning on Thursday and said flags would fly at half-mast.

Charlie Hebdo's offices were fire-bombed in November 2011 when it published a cartoon of Mohammed under the title "Sharia Hebdo".

Despite being taken to court under anti-racism laws, the weekly continued to publish controversial cartoons of the Muslim prophet.

In September 2012, Charlie Hebdo published cartoons of a naked Mohammed as violent protests were taking place in several countries over a low-budget film, titled "Innocence of Muslims", which was made in the United States and insulted the prophet.

Editor-in-chief Stephane Charbonnier, known as Charb and who had lived under police protection after receiving death threats, was among the victims.

The publication's website went down after the attack before coming back on line with the single image of the words "I am Charlie".

The attack took place on the day the latest edition of Charlie Hebdo was published, featuring controversial author French Michel Houellebecq, whose latest book "Soumission", or "Submission," imagines a France in the near future that is ruled by an Islamic government.