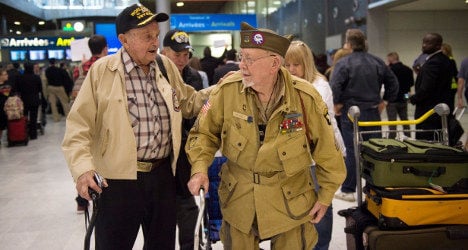 War veterans (not Bernard Jordan) arrive in Paris for the anniversary of D-Day in June 2014.

Bernard Jordan, whose "Great Escape" was hailed around the world as the embodiment of his generation's war-time spirit, died peacefully in hospital.

"He will be much missed by everyone here and our thoughts and prayers go out to his wife," said Amanda Scott, managing director of Gracewell Healthcare, which runs The Pines care home in Hove, on the southern English coast.

The former Royal Navy officer left the home in June last year wearing his medals under his raincoat and joined a coach party heading for events marking the 70th anniversary of the Normandy landings.

He was missing for around 12 hours before a younger veteran contacted the home to say he was fine and was in France with former comrades.

"I had a great time, I'm really pleased I did it," Jordan told reporters on his return home.

It was initially reported that Gracewell Healthcare had stopped him from going to France, but the firm insisted they tried to get him on a tour but he made the request too late.