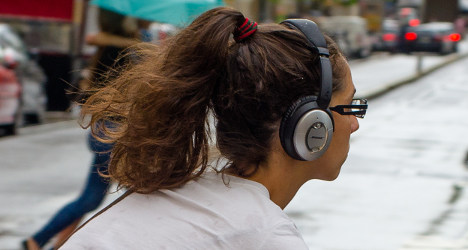 France wants to limit the sound of music in headphones. Photo: Kurt Bauschadt/AFP

After a worrying report was released this week revealing the number of hearing problems among young French people, the health minister announced she plans to crackdown on sound levels at live concerts and in headphone sets

Health Minister Marisol Touraine said on Tuesday that she will investigate ways to put restrictions on noise levels.

Her vow comes after a worrying report was released this week revealing that three quarters of 15 to 30-year-olds has suffered from hearing difficulties after exposure to loud noise.

“We are thinking of acting in two different ways: firstly to make sure headphones cannot produce sound above a certain level of decibels,” Touraine told BFM TV.

“That means headphones that are sold in shops. It's so that we can prevent someone who wears them all day from being exposed to sound levels that are too high,” she said. “The second thing is to have regulations for the noise that is emitted in certain indoor concert venues,” she said.

The minister said she will look at imposing the restrictions through amendments to her health reform bill that is set to be discussed in parliament this spring.

“This is not about banning listening to music. It’s fantastic to listen to music but we want to able to do it all our lives if we can,” Touraine added.

The minister said that young people need to be educated about the dangers of loud music as well as imposing legal limitations on sound levels.

The Ipsos study that has prompted the health minister to act revealed that many young people suffered from hearing problems such as tinnitus, (humming or ringing in the ears) or a loss of hearing after being exposed to a long period of loud noise.

The study was published with the upcoming “Week of Sound” that will take place all over France from 19th to the 25th of January.