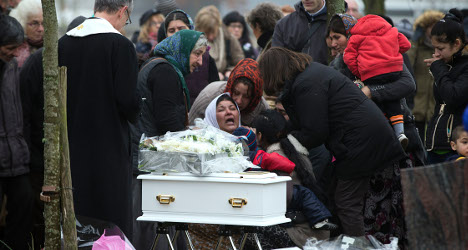 The affair made headlines around the world, and was all the more poignant because the baby of just two and a half months died the day after Christmas from sudden infant death syndrome.

The local town of Champlan, just south of Paris, refused the family a burial plot, with the mayor reportedly saying that priority should be given to those who pay their taxes — although he later denied this.

After nearly a whole day of conspicuous silence, top politicians then fell over themselves to condemn the case, with Prime Minister Manuel Valls saying it was an "insult" to France.

Even far-right leader Marine Le Pen criticised the decision, saying it showed a "lack of humanity".

But the president of the National Commission on Human Rights (CNCDH), Christine Lazerges, said the case was "the terrible proof that the Roma are the new scapegoat in France," which is suffering from high unemployment and a sluggish economy.

In its most recent report on racism in France, the CNCDH already voiced fears over the "trivialisation of racist comments about the Roma."

The European Union believes there are currently 10 to 12 million Roma throughout Europe, making them the largest minority on the continent.

A nomadic people whose ancestors left India centuries ago, the Roma have long suffered from discrimination and are frequently accused of carrying out petty crime.

But experts believe their plight is getting worse in France.

The CNCDH report showed that more than 87 percent of people in France believe the Roma are "a group apart" in society, a rise of 21 points since 2011.

This is much more than other ethnic groups such as people from North Africa (46 percent) and Asians (41 percent).

Polls also show that 85 percent of French people believe that Roma often exploit their children and 78 percent think they basically live off theft and petty crime.

Tommaso Vitale, a researcher into Roma at the Paris-based Sciences Po University, said that France's own economic woes worsened the plight of minorities.

"The spectacle of misery in times of crisis is very sensitive in political terms," he said, with most Roma living in makeshift facilities on the outskirts of towns with little basic amenities.

Almost everywhere in Europe, the same question is being asked, he said. "Is Europe there to send us Roma or is it there to give us social policies to get out of this crisis?"

Eric Fassin, a social scientist at Paris University and author of a book about the Roma, said verbal attacks on the community had got steadily worse.

"But in the case of the Roma baby, for once, we found that we had gone a bit too far," he said.

Lazarges said the "public debate" in France had to change.

In August, a French court fined a member of parliament 3,000 euros ($3,600) for saying that Nazi dictator Adolf Hitler "maybe did not kill enough" Roma.

Vitale said the only way to start de-stigmatising the Roma was to change their image as an isolated community living in shanty towns on the fringes of society.

"Without that, nothing is possible. There will always be a stigma of criminality, deviance and cruelty."