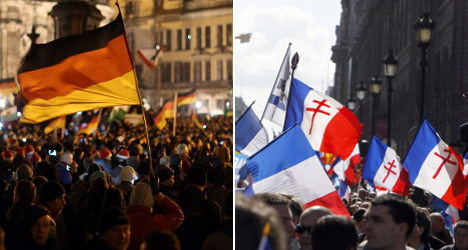 Will the anti-Islam 'Pegida' movement take off in France? It's unlikely sayy experts. Photo: AFP

The call has been sent out for those who oppose the “Islamisation of France” to make their feelings known in front of the Paris stock exchange on January 18th.

While the organisers accept they are unlikely to see the kind of numbers that have turned out for similar demos in the German city of Dresden in recent weeks, they say it's just the first step.

“The movement in Germany has been around for months, for us in France this is just the start. We are only beginning here,” Pierre Cassen, from the group Riposte Laique told The Local.

His organisation whose name roughly translates as “Secular Riposte” has organised the protest under the slogan “Islamists get out of France”.

The Pegida movement (Patriotic Europeans Against the Islamization of the West) began in Dresden in October when only a few hunded protesters turned up. But by January those numbers have swelled to 18,000.

Cassen thinks the same is possible in France,

“We admire what they have done and we want to help create the possibility that the same kind of movement can happen in France,” he said.

Riposte Laïque is however hoping the leaders from the German movement will be in Paris to help join the protesters as well as similarly minded thinkers from other European countries.

“We have contact groups in three countries which have led by example in protest against the Islamisation of Europe, – Italy, Switzerland and Germany,” Cesson told The Local.

“We hope they will come.”The protest comes at a time when the ever sensitive question of Islam and France is bubbling away once again, thanks in part to the release of two controversial new books.

On Wednesday France’s most famous literary rogue Michel Houllebecq’s new novel “Submission” will be published. His book projects an image of France in the year 2022, where under a Muslim president, all teachers have to convert to Islam.

The book, written by an author who once described Islam as “cretinous”, appears to have struck a chord and is expected to be a bestseller.

That's perhaps not surprising in a country where, according to an annual poll, in 2013 74 percent of the public believe the religion of Islam “is incompatible with the values of French society”.

One of those who thinks that way is Cesson himself. he believes its simply not possible to be both French and truly Muslim.

“The two cultures are not compatible. We have Republican values, like equality between men and women, freedom of thought and respect for different opinions, that just don’t fit with the Quran,” he said.

With the far-right anti-immigration National Front party, led by Marine Le Pen, having dramatically increased its influence in recent months and years, the time and the place appears right for the Pegida to take off in France.

However experts say it is unlikely to happen in a country that is home to an estimated six million Muslims – Europe’s biggest population.

Researcher and far-right specialist Jean-Yves Camus from the think-tank Iris (Institute of international relations and strategy) says the political climate is far different in France to Germany.

“In Germany Pegida benefits from a political vacuum because there is no National Front party,” Camus told France's L’Express news site.

“The German who is worried by Islam, but on the other hand isn’t racist, will not vote for the NPD, which is a neo-Nazi party.

“So they could end up among the followers of Pegida. In France, protesting with Pegida is the same as voting for the National Front,” Camus added.

However even the organisers of the protest in Paris accept their throngs are unlikely to be joined by the likes of Marine Le Pen and her allies.

The risks are simply too high, says Camus.

“The danger of joining this extremist movement is too great,” he said. “The National Front simply doesn’t need to do it. It’s already guaranteed the electoral support of these voters.”

“It appears that these “street” movements develop more easily in a places where’s there’s no organised political opposition to Islamisation,” the magazine wrote.

"That's not the case in France with the National Front and the "identitaire" activist movement.

Leaders of France's Muslim community are deeply concerned by the prospect of mass anti-Islam demos in Paris, like those seen in Dresden.

Samy Debah, president of the Collective against Islamophobia in France (CCIF) told The Local that the French authorities "must act to protect social cohesion."

"We are not calling for them to ban the demo but they must take the necessary measures. This kind of protest is highly dangerous for French society and the state needs to take positive measures to protect social cohesion.

"The people who organise this protest are not just attacking Islam they are attacking the fundamental principles of the French republic, such as tolerance and living together."

Daniel Cohn-Bendit, a veteran of French and European politics, puts the popularity of such anti-Islam movements down to fear down to a wider identity crisis as traditional cultures face rapid change.

"It's PEGIDA in Germany, it's also gay marriage in France," he told AFP.