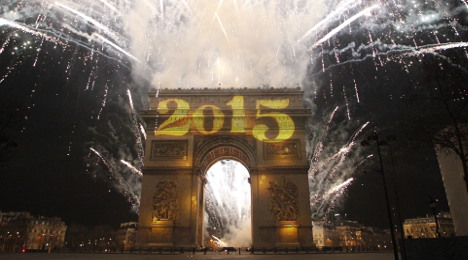 What will happen in France in 2015. Photo: Matthieu Alexandre/AFP

Mistral warship to be delivered to Russia

Officially, the delivery of the first of the two warships to Russia has been postponed by France “until further notice”, but we can expect it to be handed over at some point this year. Mainly because the deal is worth €1.2 billion to France and secondly because Putin will behave himself in 2015 which should lead to an easing of the tension in Ukraine. Hollande said himself on Monday that he wants to see an end to the sanctions against Russia once the situation in Ukraine has eased. He has had several meetings with Putin and more are planned with both men clearly wanting the deal to go through.

Paris will bid for the 2024 Olympics:

At some point this year Paris will formally announce that it will bid to host the 2024 Olympics. Although the mayor of Paris, Anne Hidalgo doesn't fancy it, the country’s president is in favour of a Paris bid to host the Olympics in 2024. With the deadline for bids being September 2015, Paris will shrug off fears it will again lose out, as it did to London in 2012, and announce it will join the running at some point in the spring. Whether it will succeed or not, well, we’ll have to wait until 2017 to find out.

Paris was given a stay of execution in November last year when Brussels postponed a decision on whether to initiate sanctions against the government until March. The idea was to give France more time to put in place more austerity measures and reforms to convince EU finance chiefs it was doing all it could to meet its commitments to bring down its public deficit. But the warning was clear- Paris had not taken “effective action” to meet targets. Well March isn’t too far away and we think Brussels won’t be as timid next time round.

House prices will continue to tumble

If you’ve been biding your time to get on the property ladder in France then 2015 is the year to make your move. According to predictions of the housing market for 2015, prices will continue to drop for old buildings by at least five percent and stagnate for newer builds. Interest rates on mortgages are also set to remain at their all-time low. Experts say that key ingredient for a boost in house prices, namely “confidence” is still lacking. So get yourself down to the estate agent asap.

Unemployment will go down. We promise

We pledge that unemployment will finally start to fall at some point in 2015, probably by December. This may seem a tad optimistic given the latest figures showed it actually rose by 0.8 percent in November along with the fact that little or no growth is predicted for the start of 2015. But many economists in France are predicting 2015 at least won’t be as bad as 2014. They point to low interest rates, a weakening Euro and lowering petrol prices for reasons to be optimistic. And that’s what we should be.

Hollande's popularity will go up

This may seem the craziest prediction yet, but with over five press conferences and interviews lined up for early 2015, François Hollande's media offensive should see him rise in the ratings surveys. It’s safe to say Hollande had a bad year last year but basically things can’t get any worse. He now appears more combative and is allowing his young PM Manuel Valls and Economy Minister Emmanuel Macron to hog the lime light as well as the take the flak, which should help him. Then there’s his predecessor as “France’s most unpopular president” Nicolas Sarkozy, whose return to the spotlight will probably help remind the voters that Hollande might not be that bad after all.

Spring will be cold, summer will be crap

No one in their right mind can predict the weather for a few weeks ahead let alone 12 months. But we’re clearly not in the right mind or at least the folks at France's Météoconsult office are not. These are the same people that foresaw the soggy August and then the Indian summer of 2014. And this time they are predicting a mild winter, before a wintery March and a “very cold but dry April”. And just to show these guys are willing to take a risk in their predictions, they say May and June will be “normal” for the season. The Local’s own in-house meteorological predicts a crap summer and a crap autumn.

Tourists will get to shop on Sundays

It might be difficult to imagine going shopping on a Sunday in France, but it won’t be for much longer. A law is set to be discussed in parliament at the start of the year that will see shops in France allowed to open on 12 Sundays a year instead of the current five. It will pass, despite opposition, although when it will actually come into force is anyone’s guess, but it should be in time for when the tourists arrive en masse this summer.

Julie Gayet to continue secret visits to the Elysée

It’s been a year now since the scandal broke over Hollande’s affair with actress Julie Gayet and although the pair have continued their fling, don’t expect her to become the official or even unofficial “first lady” in 2015. After his messy and much mediatized breakup with Valérie Trierweller last year, Hollande won’t want his private life anywhere near the front pages in 2015 although gossip magazines like Voici might have something to say about that. Hollande appears ready to remain “single” until the end of his term in 2017 and it’s also apparent Gayet is far from keen to embrace a traditional first lady’s role even if it meant invites to state dinners. So we can expect her to pay more discreet visits to the Elysée in the dead of night.

According to a recent poll, Marine Le Pen’s party has a good chance to come out on top in France’s two sets of regional elections later this year, beginning with the “departmental” elections in March before the rescheduled ballot for the reduced regions at the end of the year. After becoming France’s biggest party in last year’s European elections with 24.85 % of the vote in the back of historic performance in the local elections, the far right leader proclaimed her party as ‘The first party in France’. While that may be overstating it a little, two more strong electoral performances will have both the socialists and the UMP feeling even more uneasy.

Even if authorities insisted the two car attacks on pedestrians before Christmas were not terror related we can expect France to remain on high alert throughout 2015. Police say they foiled several terrorism attacks in cities such as Lille, Nice and in Ile de France last year and they may have to thwart more in the coming months with the French PM Manuel Valls saying things like “never before has France faced such a threat from terrorism”. With hundreds of jihadists continuing to return from the Middle East we can expect to see the threat level remain high throughout the year.  Unfortunately we may similar "lone wolf" style attacks to the one which saw a man attack two police officers with a knife whilst shouting "God is the greatest" in Arabic.

It’s going to be Laurent Blanc’s last year in charge of PSG. The coach has done a decent job but when you have Qatari owners demanding payback for all the money they have invested by winning the Champions League, it’s highly likely that it will end in tears. PSG may well take revenge over Chelsea in the last 16 next month, but they won’t get past the semi-finals where Real Madrid, Barcelona or Bayern Munich will send them packing. Oh and domestically it will be a painful season too as PSG’s bitter rivals Marseille will lift the Championship. A bad year for Blanc.