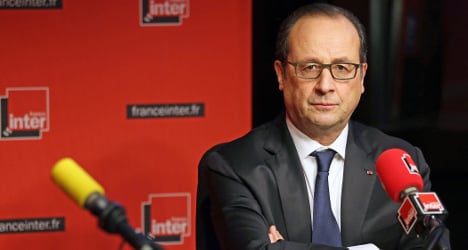 French President François Hollande took to the airwaves in France on Monday to answer questions on everything from Russia and Greece to a new airport in France. Photo: AFP

The French president continued his efforts to boost his flagging popularity levels on Monday when he opened himself up for a two-hour grilling on the morning show on France Inter radio.

The interview, which follows hot on the heels of his speech to the nation on New Year's Eve, is seen as part of his effort to put a miserable 2014 behind him.

Hollande was asked about everything from Western sanctions against Russia to the fears of a Greek exit from the eurozone and domestic issues including the controversial project to build a new airport in the west of the country.

What Hollande said about Russia:

French President Francois Hollande said on Monday that biting Western sanctions against Russia should be lifted if progress were made in resolving the Ukraine crisis.

"I think the sanctions must stop now. They must be lifted if there is progress. If there is no progress the sanctions will remain," he said during the wide-ranging interview.

He said he was expecting such progress at international talks in Kazakhstan on January 15th, when Ukraine's Western-backed leader Petro Poroshenko is to meet Russia's Vladimir Putin in a new push for peace.

The French president said that while Europe should keep lines of communication open with Putin, "he must know where to stop, and it has been costly for him."

Sanctions imposed by the European Union and the United States, along with plunging oil prices, have sent the ruble crashing by some 40 percent against the dollar last year.

The punitive measures were slapped on Ukraine's former Soviet master after Moscow annexed Crimea, and was subsequently accused of stoking separatist conflict in the east of the country.

"Mr Putin does not want to annex eastern Ukraine. He has told me that," said Hollande, who has spoken several times with the Russian leader.

The crisis in Ukraine has prevented cash-strapped France from completing the delivery of two "Mistral-class" warships to Russia, which has been in limbo since hostilities broke out in eastern Ukraine.

What the president said about Greece:

In the interview Hollande urged Greece to abide by its European commitments, as the spectre of a Greek exit from the eurozone rears its head again.

"The Greeks are free to choose their own destiny. But, having said that, there are certain engagements that have been made and all those must be of course respected," Hollande said.

Hollande's comments came amid fresh political turmoil in Greece ahead of an election on January 25th that could be won by a far-left party.

Over the weekend, the Der Spiegel weekly quoted German government sources as saying that Berlin sees a Greek exit from the eurozone as "almost inevitable" should the radical leftist Syriza party win the snap poll.

What Hollande said about everything from unemployment to terrorism:

On the domestic front the president said he takes personal responsibility for the record-high unemployment figures after famously promising to bring them down by the end of 2013.

"I am the president of the republic, I am not going to say it's the fault of the economic crisis," said Hollande.

Hollande also confirmed there would be no tax rises in 2015.

With a potential presidential battle against Sarkozy on the line in 2017 Hollande told France Inter radio that “for the moment he was not concerned about 2017”.

The president also said there was “a serious identity crisis” in France. “It weighs heavy because the country is threatened. We must therefore have strong nerves, a strong mind and a kind of Republican conviction.

Referring to the danger of terrorist attacks Hollande said there were “serious threats within our country and from outside France”.

Asked about the controversial project to build the Notre-Dame-des-Landes airport in western France, Hollande vowed it would go ahead once all legal challenges had been overcome.

The French president also said he wanted a financial tax against global warming.