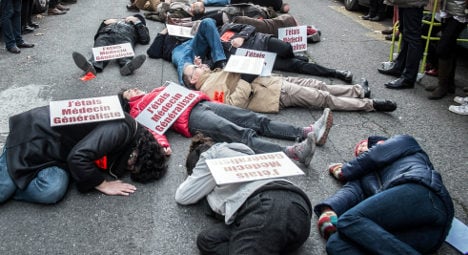 Even with seasonal outbreaks of flu and gastroenteritis doing the rounds, French doctors decided to step up their strike action on Monday.

After two weeks of industrial action in protest against planned government health reforms, family doctors (GPs) turned up the heat on Monday by promising to create a bureaucratic mess for health authorities and insurance companies.

GPs could refuse to accept patients “cartes vitale” which are used to process reimbursements of the costs of a consultation automatically and instead make them fill in forms by hand that will inevitably clog up the system and lead to patients waiting up to two months to be paid.

The planned change that has provoked the ire of the doctors is the reform to the system of payment which will see an end to patients handing over cash up front for an appointment. Instead doctors will be reimbursed directly by insurance companies, whether public or private.

Jean-Paul Ortiz from the Confederation of French Medical Unions (CSMF), the main union behind the protests, told The Local the change is “unacceptable” for those in his profession.

“Both doctors and patients in France will lose their liberty and independence. We will be dictated to by insurance companies and depend on them for our salaries," he said.

“We will be forced to spend hours checking all the reimbursements which are normally full of errors. Most doctors don’t have secretaries and we just don’t have the time to do it,” he said.

Doctors have carried out their own reports in France to highlight how dysfunctional and slow insurance companies can be to forward payments to doctors.

Bertrand Legrand a GP in Tourcoing in northern France told BFM TV that in one case a doctor had to wait 980 days before being reimbursed.

“It’s an unbelievable delay,” he said.

As a solution Ortiz’s confederation is proposing a system whereby patients pay doctors with their bank cards up front, but the money would not be debited until they are refunded by the social security.

“This system is already in place in some areas and the cost of implementing it is minimal,” Ortiz said.

Despite the apparent bad timing of the strike, coming over festive season, the French public appear to be backing their doctors.

According to an opinion poll on Sunday 58 percent of French people support the strike.