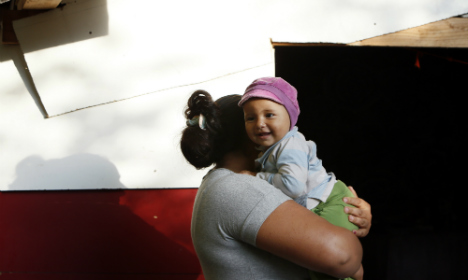 A Roma woman with her baby in 2012. The baby is not the one featured in the story. Photo: Kenzo Tribouillard/AFP

Christian Leclerc, the conservative mayor of Champlan, about 23 kilometres south of Paris, has explained his refusal on the grounds that the cemetery has "few available plots".

"Priority is given to those who pay their local taxes," Leclerc was quoted by Le Parisien daily as saying. The mayor was not available Saturday for comment.

Critics, however, believe his decision to refuse the nearly three-month-old girl a final resting place was motivated by anti-Roma sentiment.

"It's racism, xenophobia, and stigmatisation," said Loic Gandais, president of an association helping Roma families in the region.

Gandais accused Leclerc of hiding behind the fact that the baby, identified only as Maria Francesca, was pronounced dead in another town.

The child was rushed to hospital on December 26 in nearby Corbeil-Essonnes, where she was declared dead from sudden infant death syndrome.

The child's parents are Romanian natives who have lived in France for at least eight years, according to supporters. Their two other children are attending school in Champlan.

Faced with the mayor's refusal, they have arranged for their daughter to be laid to rest Monday in the town of Wissous, a few kilometres away.

Explaining his offer to host the burial the conservative mayor of Wissous, Richard Trinquier, told AFP it was "a question of humanity".

"The pain of a mother who carried a child for nine months, and lost her after two and a half months must not be worsened."

Most of France's roughly 20,000 Roma live in makeshift settlements with little or no access to basic amenities — in Champlan, they live on two plots without water or electricity.

In August, a French court fined a member of parliament €3,000 ($3,600) for saying that Nazi dictator Adolf Hitler "maybe did not kill enough" Roma.

The European Union believes there are currently 10 to 12 million Roma throughout Europe, which makes them the largest minority on the continent.

In many countries, they face discrimination, extreme poverty and unequal access to health care and education.