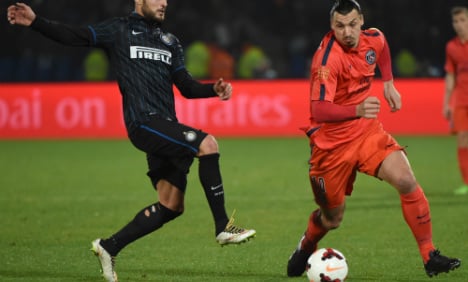 Zlatan Ibrahimovic - one of ten PSG players to be affected by the tax. Photo: Fadel Senna/AFP

A timeline of its twists and turns:

– February 27: Socialist presidential candidate Hollande pledges during his election campaign to tax annual income of more than one million euros ($1.2 million) per year at 75 percent.

– March 1: French footballers blast the plan, saying it would kill the sport by scaring off top players.

– December 9: Prominent French actor Gerard Depardieu takes up residence in a tiny village just over the border in Belgium, which is a favoured spot for wealthy French tax exiles. Politicians react with dismay. He goes on in 2013 to receive a Russian passport, paying a reported rate of only six percent in his newly-adopted country.

– December 29: France's top constitutional body strikes down the tax, saying it is unconstitutional because, unlike other forms of income tax, it applies to individuals instead of whole households. The government vows to push ahead and propose a revision that would conform with the constitution.

– October 18: Parliamentarians adopt the new tax at first reading. Capped at five percent of a company's turnover, it will be due in 2013 and 2014 on salaries of more than one million euros a year. The government says it will concern around 470 companies and 1,000 bosses or workers and will bring €210 million a year into the coffers.

– October 24: French football clubs announce they would go on strike for the first time in more than 40 years from November 29 to December 2 in protest at the new tax. On November 14 the clubs state that they have postponed the strike, after the start of talks mediated by Socialist MP Jean Glavany.

– October 6: During a visit to London, Prime Minister Manuel Valls confirms that the tax will not be extended and will therefore be scrapped in early 2015.

– The tax lives through its last few weeks. For businesses which have to pay it, the tax on 2014 income is eligible on February 1st 2015.