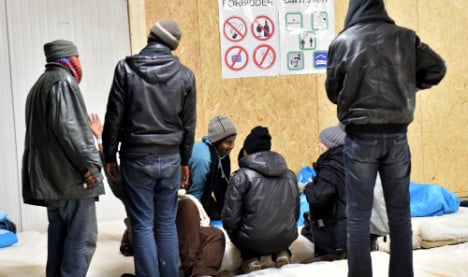 The clashes took place in the sand dunes near the port where hundreds of migrants hoping to get to Britain wait out their chance in makeshift camps and shelters.

"It was a big fight involving 200 migrants. We have had ones of this size before," police official Nicolas Honoré told AFP.

Tensions between African and Afghan migrants boiled over amid frustration about the lack of lorries crossing the Channel because of the holidays, according to Christian Salome who works with a group that provides meals to the migrants.

"Some of them had been drinking, especially the Africans, which can cause tensions with the Afghans who do not drink," he added.

Calais is the main staging post for migrants trying to reach Britain from continental Europe without official documents, usually by smuggling themselves aboard one of the thousands of trucks that leave daily via the port and cross the Channel by ferry.

Around 2,300 migrants, mostly from Sudan, Eritrea and Syria, live in the makeshift tent village in Calais known as "the jungle".

The town hall is expected to open a day facility for migrants in April with toilets and showers.