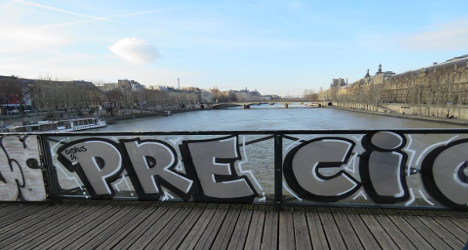 The panels have been mounted to prevent the bridge from collapsing under the weight of the 'love locks'. Photo: Michel Gauret

The  panels on the Pont des Arts bridge near the Louvre were over the New Year celebrations covered with spray paint spelling out the word “Preciosa”, or “beautiful” in Spanish.

“Looks more ‘feo’ (ugly) from where we're standing,” the founders of the grass-root “No Love Locks” campaign wrote on their Facebook page, asking: “Is there no respect for Paris anymore? Proof that ‘love locks’ breed more vandalism.”

Lisa Anselmo, one of the founders of the campaign, told The Local in an emailed response that: “Street art has its place, but this is not street art; this is an act of violence on the people of Paris, on their treasured historic sites.”

“Since No Love Locks is promoting responsible tourism and the preservation of historic structures and places in Paris, we are strongly opposed to graffiti on these sites and consider it vandalism outright.”

Anselmo said it was not immediately clear who is behind the vandalism – which has also become increasingly common on the plywood boards installed during the high tourist season to cover the padlocked wire mesh panels as a stop-gap measure – but said she has witnessed some tourists graffitiing on them “countless times”.

“It's become customary to deface the bridges in this way as a component of 'love locks',” she said.

While one Facebook commentator suggested that CCTV cameras should be put into place and that vandals should be subject to immediate arrests and fines, another said that: “Now it looks like a NYC subway”.

The trend of attaching so-called “love locks” to the bridge began in 2008, with foreign and local lovers sealing their love by attaching a padlock to the bridge’s railings and throwing the key into the Seine river.

The weight of what now amounts to thousands of padlocks, however, has caused parts of the footbridge to collapse and officials say the rusting keys are polluting the Seine.

Anselmo estimates that by the end of 2014, nearly one million padlocks had been attached to Parisian bridges, and especially to the Pont des Arts.

In September, the city therefore mounted panels to the bridge in a bid to save it from more damage, urging tourists to show their love by instead uploading “selfies”.

“The wire mesh panels were collapsing under the weight of locks at such a rate that the city could not keep up,” Anselmo said.

The “No Love Locks” campaign is a grass-root effort that was founded by  Anselmo, a former New Yorker, and Lisa Taylor Huff, a French-American, who both live in Paris who feel that the rusting ‘love locks’ are rendering the City Of Lights ugly.