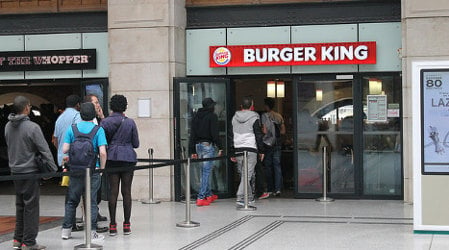 vanoukia has recieved hundreds of orders since she launched the challenge. Photo: Connie Ma/ Flickr

In October, a French youth who goes by the Twitter handle of @vanoukia cheekily challenged the American fast-food giant Burger King to launch a restaurant in her city by tweeting: “When there’s a Burger King in Lille I’ll treat you all to a meal.”

But the young tweeter, whose full identity has not been revealed, may have spoken too soon. Earlier this week, Burger King France responded to her tweet announcing its opening in Lille with a photo of vanoukia’s tweet plastered on a giant red tarpaulin along with the message: “Dear @vanoukia, luckily no one has printed your tweet on tarpaulin.”

On the tweet itself, Burger King Lille added: “And luckily no one has retweeted this photo.”

But it was. The Twitter challenge immediately went viral, with the Burger King response having been retweeted more than 4,500 times and hundreds of Burger King orders flooding vanoukia’s timeline.

Vanouka’s orginal tweet on Friday appeared to have been erased.

After the initial shock of what had happened, vanoukia, who has 531 followers and has tweeted more than 19,100 times since joining the social network, responded in good humour, tweeting on Thursday: “Next time I won’t tweet any silly things.”