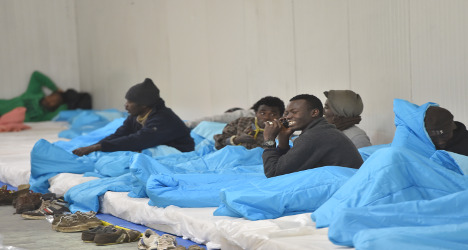 More than 500 migrants came to the night shelter while it was open. Photo: Philippe Huguen/ AFP

The town hall said it would no longer offer migrants overnight accomodation in an industrial hangar near the busy port "having taken account of the rise in termperatures."

The hangar had been open the past seven nights, taking in around 150 to 200 people per night who slept on matresses and judo mats.

"More than 500 different people came," said David Lacour, head of the Solid'R group that managed the programme, adding that it had been a very "pleasant" atmosphere.

He said many migrnats took it in turns to spend the night in the hangar so that their tents around the port would not be stolen.

Calais is the main staging post for migrants trying to reach Britain from continental Europe without official documents, usually by smuggling themselves aboard one of the thousands of trucks that leave via the port and cross by ferry every day.

Around 2,300 migrants, mostly from Sudan, Eritrea and Syria, live in the makeshift tent village in the outskirts of Calais known as "Jungle".

The town hall is expected to open a day dacility for migrants in April with toilets and showers.