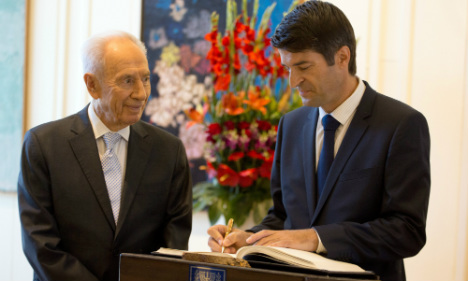 Foreign ministry spokesman Emmanuel Nahshon told AFP that the ambassador, Patrick Maisonnave, was being summoned to the ministry in Jerusalem later in the day.

France along with China and Russia were among the eight countries which voted in favour of the text on Tuesday, but the resolution fell short of winning the nine "yes" votes necessary for adoption within the 15-member Security Council.

President Mahmud Abbas Wednesday signed a Palestinian request to join the International Criminal Court, seeking a new avenue for action against Israel after a failed UN resolution on ending the occupation.

The Palestinians hope ICC membership will pave the way for war crimes prosecutions against Israeli officials for their actions in the occupied territories.

But Israeli Prime Minister Benjamin Netanyahu swiftly hit back, saying the Palestinians have "more to fear" than Israel from the Hague based court.

He cited the Palestinian leadership's links to Hamas, the militant group which Israel describes as a "terrorist organisation" and which is part of a unity government with Abbas's Fatah movement.

The ICC can prosecute individuals accused of genocide, crimes against humanity and war crimes, and Palestinian plans to become a party to the court have been strongly opposed by Israel and the United States.