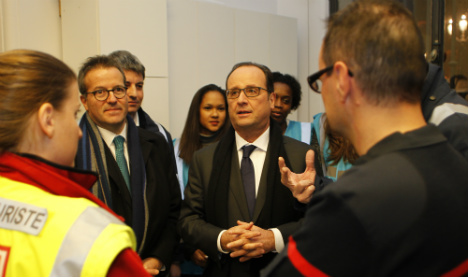 Seeking to rally his countrymen depressed by sky-high unemployment and a sluggish economy, Hollande said France had "every reason to have confidence in itself."

"The year 2014 was a tough year and defined by challenges of all sorts. I have stayed on track and am firmly following the path I have set out," he said.

2014 has been a terrible year for the French president, who plumbed depths of unpopularity not seen in decades amid persistently high unemployment and excruciating revelations about his private life.

Hollande was left red-faced when glossy people magazine Closer revealed his affair with actress Julie Gayet and he suffered further humiliation when former first lady Valerie Trierweiler published a kiss-and-tell bestseller about her time with the president.

Politically, Hollande faced down a rebellion from the leftist wing of his Socialist party that resulted in an emergency reshuffle following the sacking of two rebel ministers.

And on the economic front, the eurozone's second-largest economy has lurched from disappointment to disappointment, with growth grinding to a near halt and a stubbornly high deficit angering European partners.

Hollande is pinning his hopes on two reforms he hopes will kickstart the moribund economy: a package of tax breaks for companies in return for job creation and a move towards liberalising certain sectors of the economy, including allowing more Sunday shopping.

The year 2015 promises to hold further challenges for the embattled president, although his popularity ratings have climbed slightly from their all-time lows in recent weeks.

He faces his old enemy Nicolas Sarkozy, invigorated by his recent election as head of the centre-right opposition UMP party.

And he also faces a buoyant far-right National Front party, with polls suggesting that leader Marine Le Pen would come top in a first round of a presidential election if it were held now.

Early tests will come in local and regional elections in March and December as the French political class already turns its thoughts to the presidential vote in 2017.

Hollande took an indirect pot-shot at Le Pen by saying that it is "not by breaking up Europe or leaving the eurozone that we will convince (our partners)."

"France will move forward next year, in all areas for everyone. This is the battle I have started and I will keep fighting to the end against conservatism — and there are a lot of them — and against popularism — and they are dangerous."

Finally, Hollande looked forward to a pivotal Climate Change summit in Paris at the end of 2015.

"We need to push the world into making a declaration for humanity's right to preserve the planet," he said.