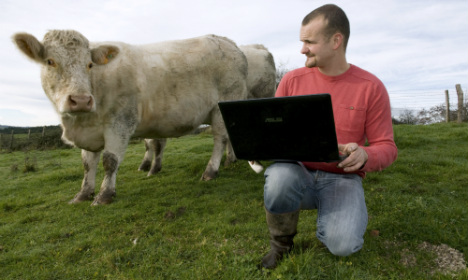 Described as blond, muscular and from a good family, Bariton's online profile has caught the eye of Sylvain Frobert, who is thinking of hooking him up with Anita, or Henriette.He could also be a good match for Desiree. Or maybe even all three?

But Frobert is not a matchmaker in the traditional sense. He is a farmer in Saint-Prix in the centre of France raising 160 Charolais cows for meat. And he needs just the right genetic material to boost his herd.

Like many desperately seeking the right partner, the 33-year-old has turned to the Internet, where the website trouverlebontaureau.com (“find the right bull” in English) has hundreds of profiles of potential mates.

Farmers like Frobert can log onto what looks very much like a traditional online dating website, to admire the muscular curves of hundred of bulls, as well as an extensive family tree to determine their all-important breeding.

“Matches for demanding cows!” proclaims the site, in a play on a catchphrase used by several popular local dating sites which advertise themselves as being for “demanding singles”.

The website was launched in France in October by a group of breeding associations during the country's Farming Summit.

Breeders can input details about their cow such as her age and race, as well as what characteristics they are looking to improve in their herd: milk, growth, muscular development or calving prowess.

Once this is done, dozens of profile pictures appear on the screen, and the hardest part is deciding from among the beefy bevy of French bred bulls.

What about Cyrano, a Charolais bull who boasts a “breathtaking body”? But there is also Arlequin, a Blonde d'Aquitaine — a breed from southwestern France — who despite his rural upbringing has a “Parisian elegance”.

The cream-coloured bull Euskadi is targeting “females who live for blondes”, while Braise boasts an “exceptional rump”.

But unfortunately for Bariton the bull and Desiree (or Henrietta or Anita) their love will remain virtual, with no long walks or passionate moments in a French field.

Once Frobert makes his choice it all gets rather clinical, and a specimen of the bull's semen is dispatched to him for artificial insemination.

With the falling price of meat, genetic progress has allowed farmers to breed animals that are “profitable, super efficient and adapted to the market,” said Pascal Soulas of Charolais Univers, which carries out artificial inseminations and uses biotechnology to tweak the genetic profile of the breed.

“Today the size of farms has doubled and there is often only one son looking after the farm after his parents grow too old to help him,” said Soulas.

“He needs docile cows who can give birth without his intervention or that of a veterinarian.”

Bulls who have been bred not to have horns, making it easier to transport and handle them, are also an option for farmers.

The site also allows farmers to choose sexed semen which lets them choose male or female calves, depending on their needs.

Soon versions of the site are expected in English, Spanish, Italian and Chinese to “export French genetic know-how” to lucky cows worldwide.