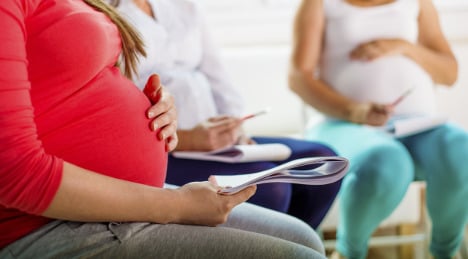 Life always teaches us a few lessons, none more so than when you're having a baby in France. Photo: Baby photo

New Year's Eve is traditionally the day when most babies are conceived in France, apparently. So what better time than to share a few tips.

No need to say anymore than that really, is there? Apart from maybe issuing an apology on behalf of my partner to anyone who might have sat on the wrong seat in the last carriage of the Metro on Line 2 on the afternoon of September 5th.

This situation came about because we were told the French capital’s cabbies, who are not really known for their warmth, would rather pick up a queasy drunk at 3am on a Saturday morning than risk taking a heavily pregnant woman to hospital. That may of course not be true.

You’ll be going to scans and pre-natal classes and basically talking about everything to do with child birth months before there’s even the slightest hint of a contraction.

So it’s best to arm yourself with all the appropriate French in advance so you know what the doctors, the midwives, the radiographers, the friends, family and grandparents are all on about. Actually having said that…

And then there’s the day of the birth itself. Here are three words you might need to know to understand what's going on:  “Péridural” is epidural, “Pousse” is push and “Arghhhh Putaaaaaaaaiiiiiiiinnnn” , I think translates into English as "I am in a little bit of pain".

Apparently there’s nothing worse for a French woman in the painful throws of childbirth than to have her confused partner translate all the instructions of the French midwife into English, time and time again during labour. Despite repeatedly being told not to. It will lead to her barely being able to look at you.

Although they do appreciate having water sprayed into their faces and mouths, to make up for the annoying translation service.

The name Isla seemed like a good option as it's pronounced pretty much the same in both languages, which was the aim. It was only after she was born when one of the nurses read out her name from a piece of paper that we realized we might have lumbered the little lass with the life-long burden of having to correct how people say her name.

When reading "Isla" the French pronounce the "S" of course as in "Isla Bonita". Hadn't thought about that. It may come back to haunt us.

A friend of a friend paid a pre-birth visit with his partner to a hospital in London and were told that if all goes well with the birth, they would be out in two hours.

Two hours! Not even former French minister Rachida Dati, who famously went back to work five days after her baby was born, could do that.

My partner spent a full three days and four nights in hospital, during which time you get to learn how to grow a baby at home.

Plus French docs don’t take risks. They’ll send you for scan after scan if necessary, won't hesitate about signing you off work weeks earlier as a precaution and prescribe enough drugs and creams for you to open your own pharmacy specializing in second-hand products.

Then there’s the course for the “re-education of the perineum”, more commonly referred to as “fanny physio” by the English and then the abdominal strengthening classes, all paid for by the state.

It’s a fantastic service but is it affordable in the heavily indebted France of today? Cuts are on the horizon so it might not last too long. Basically come to France to have your babies ASAP.

In the UK, all new parents have to do is go to a few “NCT” antenatal classes and they are guaranteed new friends for life, and their babies too.

Well don’t expect the same in Paris. Although there are pre-birth classes, they are rarely with the same group of people as expectant mums and sometimes dads pick and choose which ones to go to and then rush back to work.

And as is often the case in Paris, there’s little interaction between people who don’t know each other, even if they’re all sporting massive stomach bumps and are scared sh**less about the fact their lives are about to be turned upside down.

7.     Apply for a crèche before the baby is conceived

France may be feted for its family-friendly policies, such as the €900 birth bonus (prime de naissance) the state hands out, or its family allowances and pre-schools (The Écoles Maternelles that allows kids to attend aged three, therefore saving parents a fortune in child care), but it has a serious lack of crèche places, or at least in Paris.

Basically you have to apply early, very early, perhaps as soon as you decide to have a baby. (Although the rules appear to be once you reach six months of pregnancy).

We applied on time but there was still no room at the inn, we were told, and there probably wouldn’t be until late 2015, if we're really lucky.

Believe it or not, it is possible to get a place in crèche, even in the 10th arrondissement where we were told there are three to four places for every ten kids.

But if you don’t then all is not lost.

All you need to do is start grovelling, even pleading to whoever you can. We were told to write a letter to the head of child services at the Town Hall, telling her how desperate we were to get our baby into a crèche, how we admired the French crèche system so much and how dignified and beautiful the Town Hall official was.

We were also told to do the same to all the heads of the individual nurseries, although we might have overdone it and have been told by one nursery to stop writing to them (six Christmas cards with photos of our baby was unnecessary apparently).

A friend of a friend even wrote to ex-first lady and relatively new mum Carla Bruni to ask for help in finding a place in a crèche. And they ended up getting one. Although it's not clear if 'Sarko' got involved.

The alternative child care options to crèches are the “assistantes maternelles”.

They are basically child minders who look after two or three children at a time in their own home.

They have their advantages as your young baby should get more attention than they would at the crèche.

If you go down this road, you can get a list of “Assistantes Maternelles” from the Town Hall, each charging slightly different rates.

Having to choose one is a daunting task, given you are entrusting your relatively newborn child to their care, but in the end however there’s such a demand for them that it's the child minders who end up choosing you.

It can depend on how close you live to them, or whether you’ve got a boy or a girl, a baby or a toddler. Either way, the ball's in their court it seems. There’s always been differences between the dress senses of Parisians and the English, but it’s never more pronounced than for babies.

Every item of clothing we had from England was animal themed: bumble bee hats, monkey pyjamas and rabbit-covered dresses. But the Parisians just don’t seem to do animals on baby clothes. They prefer a good navy blue cardigan or purple dungarees.

PARTNER CONTENT
QUIZ: Can you guess the cost of healthcare in different countries?
Url copied to clipboard!