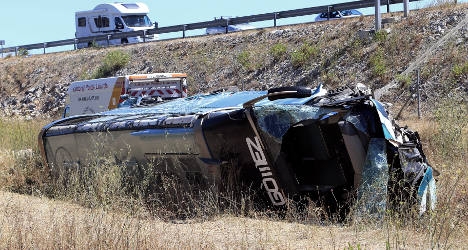 By the end of 2014, road deaths in France are expected to have risen by around five percent. Photo:AFP

Travelling on France’s roads just isn’t as safe as it used to be with government figures showing a spike in the number of road deaths in 2014.

By the end of 2014, road deaths in France are expected to have risen by around five percent, according to French Interior Minister Bernard Cazeneuve.

The prediction is based on figures collected at the end of November as well as the provisional toll provided by the National Inter-ministerial Observatory for Road Safety, French daily Le Figaro reported.

2013 marked a record low for France with the number of deaths falling by 11 percent. The total of 3,268 fatalities was the lowest since 1948, when data was first recorded

Last year saw a drop in deaths for most forms of transport, with the biggest fall seen for car passengers (14 percent); motorcyclists (three percent); cyclists (eight percent) and deaths among pedestrians on roads also fell by seven percent.

Overall though the picture looks different when the numbers are studied over a longer period of time.

The rate of fatalities had been falling gradually since 1972, a black year on France's roads when 18,000 people were killed.

In an effort to bring down the death toll, Cazeneuve will in January announce a raft of new measures for 2015, including a crackdown by authorities in accident black spots.

As part of an experiment, the speed limit will be reduced from 90 km/h to 80 km/h in two to three accident black spots, a measure which is estimated to save around 350 lives per year.

Fast-acting saliva tests will also be introduced for detecting alcohol and drugs.

The spike in deaths this year will no doubt be a blow for the government which vowed to improve France’s checkered road safety record when it came to power in 2012.

Speaking at an annual Road Safety Council meeting in 2013 in Paris, Valls announced that he would ask experts to consider a plan to install “black box” recorders (Flight Data Recorders) in French vehicles, with the aim of reducing deaths on French roads.