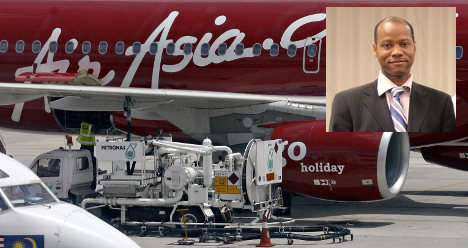 "Since he was very young, it was his dream to be a pilot and the dream came true. He had been in Indonesia for three years … He was a very good pilot, an excellent one," she said.

Flight QZ8501 disappeared over the Java Sea on Sunday and by Tuesday morning officials in Indonesia announced that search teams have spotted debris off the coast of the island of Borneo.

Renee said she was realistic about her chances of seeing her brother, originally from the island of Martinique in the Antilles, alive. "When a plane falls out of the sky, there are hardly any survivors."

She said she last spoke to him on Friday over the Internet. He told her he had spent an enjoyable Christmas and was heading off to work the next day.

"We want them to find the plane, to explain to us what happened and to know whether we can go there, myself and my mother," said Renee.

"Remi Plesel had been a co-pilot for three years after a brilliant career as an engineer for (oil company) Total."

The co-pilot's mother, Rolande Peronet-Plesel, told rolling news channel BFMTV that she received the call every parent dreads at 03:00, from her son's girlfriend.

"She told us that the plane Remi was flying had gone down."

"I'm waiting but we're used [to planes going down] and not finding people. They have never found the last plane that went down in the same place," she said, in an apparent reference to missing Malaysia Airlines MH370.