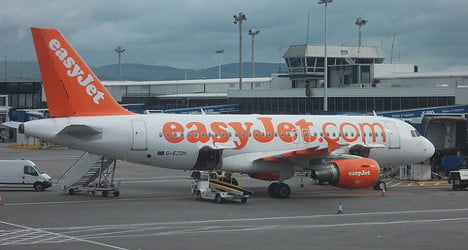 EasyJet has been forced to scrap a raft of flights on New Year's Day in France. Photo: AFP

The airline announced on Tuesday it was cancelling 70 flights from and to various airports in France after two unions called on cabin crew to strike.

In all, 24 flights due to depart from Charles de Gaulle airport in Paris have been scrapped, 14 from Orly airport to the south of the capital, 20 from Lyon, six from Nice, four from Toulouse and two from Lille.

The travel disruption is more bad news for easyJet passengers who faced similar problems on Boxing Day (December 26th) when 38 flights were cancelled because of industrial action.

The workers are upset over frequent last-minute changes to their schedules and have demanded a larger share of the company's profits.

The unions complain that easyJet is making too many last minute changes to the schedules of cabin crew staff, and oppose making bonus payments dependent upon customer satisfaction when much of the passenger experience is determined by check-in and luggage handling that is outsourced to other companies.

EasyJet's boss in France Francois Bacchetta has said he understands the "frustration" of the cabin staff and added that the company was working on this "very complex" issue.

The airline has been able to minimise disruption by bringing in cabin crew from the UK.

Eric Cunnac of the Unac union said the airline's use on Friday of British cabin crews on French flights "was a way of breaking the strike".

SNPNC-FO representative Laurent Nicolas complained that easyJet had specially flown in replacement cabin crews and had offered them up to €140 ($170) to work the French flights.

An easyJet spokesman confirmed it had flown in British cabin crew staff who had volunteered to work.