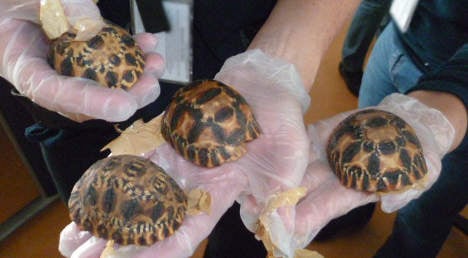 The species — known as "radiated tortoises" — is found only in Madagascar and prized by collectors for the unique pattern on their shell case.

Customs officials said the tortoises were destined for Laos.

Fifteen of the baby reptiles have died since their discovery in the crate carrying sea cucumbers on December 14 due to the "particularly unsuitable conditions of transport," customs officials said.

The survivors have been taken to Tortoise Village in France's southeastern Var region.

"We put them in a warm place and cleaned them with disinfectant," said the centre's director Bernard Devaux. "They didn't have enough water but they should be rehydrated slowly to avoid a new shock."

He described the baby tortoises as "magnificent but very fragile, each one has a different shell pattern."

Weighing only 20g (0.7 ounces) and measuring up to four centimetres (1.5 inches) the tortoises are too small to face a second international flight and will likely spend a few years in France before being returned to Madagascar.

The tortoises can live up to 100 years.

"They are considered the most beautiful tortoises on the planet. You see them sold for $10,000 in New York or Tokyo and pressure is increasing as rich Chinese get involved," said Devaux.

"They represent too much money. They are beautiful so they are hunted. Maybe it would be better if they were ugly."

The tortoises are listed as critically endangered by the International Union for Conservation of Nature (IUCN) which estimates they could be extinct within 50 years as a result of habitat loss and the international wildlife trade.