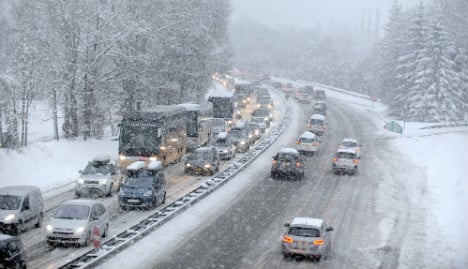 Snow fall as vehicles move bumper-to-bumper along the motorway near Albertville, on December 27, 2014. AFP Photo/Jean-Pierre Clatot

The snow and ice hit as a rush of holidaymakers were heading to and leaving from ski resorts in the Savoie region in southeastern France, where authorities set up shelters in at least 12 towns.

The snow, freezing rain and icy conditions caused the death of a 27-year-old man whose car slid into a ravine in the Belledonne mountain range.

France's Interior Minister Bernard Cazeneuve in a statement urged drivers "to exercise the utmost caution" and asked those who could delay their trips to do so.

The country declared an orange weather alert — one step under the maximum red alert — in 19 regional departments.

One driver stuck in his car on a freeway in the Alps with four passengers, Kevin Clavel, told AFP: "To go 130 kilometres (80 miles) it's taken us 10 hours."

Elsewhere in France, it was wind and not snow that wrought havoc for holiday travellers.

Storms packing gusts of up to 160 kilometres (100 miles) per hour forced the temporary closure of France's port of Calais on the English Channel and the suspension of car ferries to and from Britain.

A few kilometres outside the industrial northern city, thousands of illegal migrants living in makeshift camps struggled through a second night of freezing temperatures.

"The conditions outside are hellish in the 'jungles'," said David Lacour, the director of Solid'R, which is running a care centre to help migrants survive the cold.

"The storm blew away a lot of tents — some now have nothing."

Mattresses line the floor of the old warehouse, once used to store flowers now filled with groups of migrants, some playing cards, some sleeping, some trying to dry their soaked shoes and socks after walking for more than an hour to get here.

Up to 2,300 migrants are thought to be in Calais and surrounding areas, where they live in flimsy tents waiting for a change to complete their final journey to Britain.

"This is a good shelter here, people help us a lot. It is difficult to survive in the 'jungle'," 23-year-old Eritrean Petrus told AFP.

Strong winds also forced the closure of the gardens of the famed chateau of Versailles near Paris.

Snow caused disruption in Britain too, leading to power shortages in more than 100,000 homes and delays at airports.