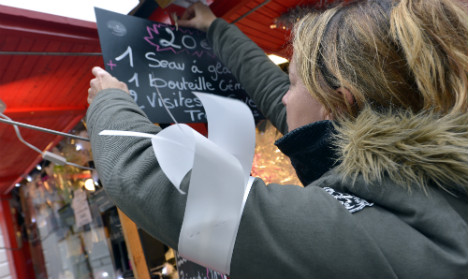 A vendor wearing a white armband to show solidarity with victims of an attack hangs a sign at her stall at the Christmas market in the western French city of Nantes. AFP Photo/Georges Gobet

The 37-year-old man was found to have a blood alcohol reading of 0.18 in his system after the attack on Monday in the western city of Nantes. The legal limit in France is 0.05.

He remained in hospital under police surveillance, having stabbed himself several times after driving his white van into the crowd.

The violent incident was one of three in as many days that left France reeling and fearing a wave of attacks, possibly by Islamic jihadists. But the government said they were not linked.

The spate of violence began on Saturday when a man with a knife attacked three police officers in the central town of Joue-les-Tours while shouting "Allahu Akbar" (God is greatest).

Then on Sunday a driver ploughed into pedestrians in Dijon in the east, injuring 13 people while also shouting the same Islamic phrase, which has been used by extremists during violent attacks.

The 40-year-old driver had a long history of mental illness, and no ties to jihadist groups, government said.

Nonetheless the attacks have frayed nerves at a time when France has been repeatedly threatened by the Islamic State group over its role in the US-led coalition trying to combat the jihadists in Iraq and Syria.

Nantes prosecutor Brigitte Lamy said the Christmas market attacker's mental state appeared to have "deteriorated these past weeks". She said he lived alone and worked in gardening.

Lamy said a notebook found in his car contained "confused" remarks about his "hatred of society" and "risk of being killed by the secret service". He also claimed his family was disparaging him on the Internet, she said.

Sources close to the investigation said he had a drinking problem and had been involved in a case of theft and receiving stolen goods in 2006.