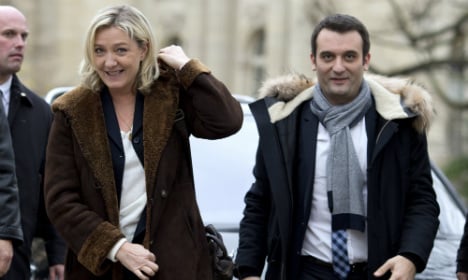 Earlier this month, the magazine published four pages of photos taken in Vienna of party Vice President Florian Philippot with a "television journalist" presented as his boyfriend whose face was blurred out.

The weekly also published a smaller picture on its front page titled "Yes to love for everyone", in reference to the high-profile "Marriage for everyone" movement that supported same-sex unions, which were eventually legalized in May 2013.

Publication of the photos sparked outrage in France, where politicians' private lives are still regarded as sacrosanct, although this is starting to change.

Closer is the magazine that revealed President Francois Hollande's affair with actress Julie Gayet earlier this year, prompting him to split with long-term partner Valerie Trierweiler.

The Paris court on Wednesday also told the magazine to publish its verdict on the front page and pay Philippot €3,500 for his legal fees.

Gregoire Lafarge, Philippot's lawyer, had argued Monday in court that the magazine had not acted in the public interest but purely to make money.

"Mr Philippot is admittedly a public figure but he is not a celebrity and has always explained that sexuality is an intimate affair," he said.

"To 'out' (someone) is to stigmatise. After sexuality, what will we throw out to the public — religion, health?", added Lafarge, who had initially asked for €50,000 in damages."

But Delphine Pando, lawyer for Closer, argued the magazine had revealed the information in the public interest.

She pointed out that Philippot was high up in the National Front party, which was strongly divided on the issue of gay marriage.

The judge ruled Wednesday that "even if the magazine says that Mr Philippot is the man who is most invited to morning radio and television shows after the National Front leader, his private life was not widely known and he never intended to publicly reveal it."

He also pointed out that the weekly had a lot of readers and that Philippot and his friend were photographed with a telephoto lens, which could constitute "harassment."