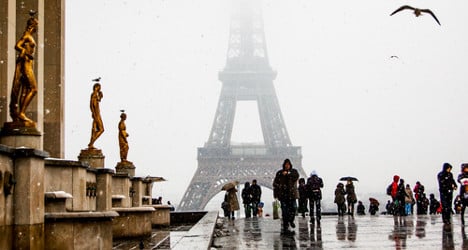 Christmas Eve will be wet but mild for most of northern France, with temperatures as high as 12 degrees expected in Paris. Paris in the rain: Shutterstock

Christmas Eve will be wet but mild for most of northern France, with temperatures as high as 12 degrees expected in Paris.

The rainy weather will reach France’s interior regions by the time the sun sets on the 24th. The south is expected to remain cloudy but dry.

By Christmas morning, the sun is likely to be shining all across L’Hexagone, although it is expected to turn cloudy and rainy in some parts of southern France by the afternoon (see Meteo France map below).

The bad weather will have disappeared by Boxing Day, giving way to crisp sunny weather everywhere in France, Meteo France has reported.

France’s official weather agency isn’t 100 percent sure what to expect for the weekend of the 27th and 28th but snow has been predicted to fall in the northern region of Nord Pas-de-Calais.

Unfortunately for those hoping to the head to the slopes this Christmas, there won’t be much snowfall in either the Alps, the Vosges or the Pyrenees, an ongoing problem since the beginning of the skiing season.