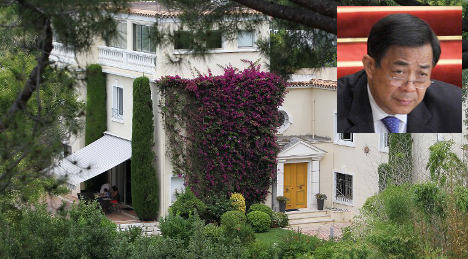 The former Communist Party rising star was accused of accepting the property as a gift from a businessman. Photo: Liu Jin and Jean Christophe Magnenet/AFP

The bougainvillea-clad mansion, situated in one of the most exclusive neighbourhoods in the French Riviera resort of Cannes, emerged as a key exhibit in the corruption case against Bo, who was sentenced to life in prison last year.

The former Communist Party rising star was accused of accepting the property as a gift from a businessman.

Nestled on a hillside overlooking the Mediterranean, the six-bedroom villa has been put on sale by real estate firm Fine & Country for €6.95 million ($7.9 million), the Chinese edition of the Global Times newspaper reported on Monday.

The agency has a villa listed on its website at that same price with a photograph that matches the one published by the Global Times.

A representative for the agency declined to comment when contacted by AFP.  The two-story residence has long been managed by people close to the ambitious and charismatic former head of the southwestern megacity of Chongqing.

Neither Bo nor his family appear on official French records as the property's owners, and Bo has previously testified that he was "completely unaware" of it.

The villa is registered under the name 'Residences Fontaine Saint Georges', a company based in Cannes since 2001.

According to French records, the company received payments from several corporate entities, one of them a limited company registered in Luxembourg.

Documents detailing the complex payment structures show that three different people have managed the firm in recent years, the second of which was was Neil Heywood, a British friend and business partner of Bo who was found dead in November 2011. Bo's wife Gu Kailai was convicted of poisoning him.

Since May 2011, the company has been led by Feng Jiang Dolby, a former Chinese television presenter also reportedly close to Bo.