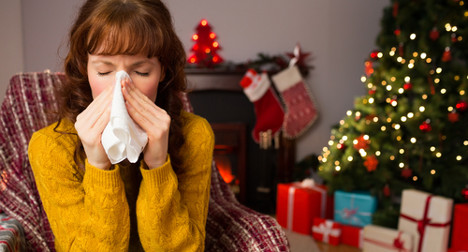 The strike is expected to end on December 31st. Photo of a woman sick during Christmas: Shutterstock
General practitioners went on strike on Tuesday with specialist doctors also joining the industrial action that is set to run until December 31st.
Hospital emergency room doctors however ended their strike (which actually involved them earing badges rather than downing tools) on Tuesday a day after holding talks with the government.

As for GPs and specialists, they will close shop from the 23rd to the 31st of December in protest at certain aspects of an upcoming health bill.

GPS are angry about details of the reform, notably one change that will allow pharmacists to vaccinate patients – an act that is currently almost exclusively reserved to doctors.

Practitioners including cardiologists, paediatricians and ear, nose and throat (ENT) specialists also decided to join the industrial action against the bill, due to be debated at the National Assembly in early 2015.

Jean-Paul Ortiz, president of the Confederation of French Medical Unions told Europe 1: “Both specialists and GPs have had enough, because they are not represented in this bill."

According to Ortiz, doctors are also unhappy with the proposed compulsory third-party payments – which would see doctors bill the state and private insurance companies for patients' visits rather than the patients paying up front themselves, as happens now.

If you do fall ill during the Christmas period in France, here are some useful tips for seeking medical attention:

– Call your specialist doctor to find out if he or she is taking part in the strike. They may be obliged to work or do so for ethical reasons.

– Dial 15 on your phone, you will be redirected to the right doctor depending on your condition. It’s a 24-hour number and the best option if it’s an emergency, especially if casualty staff in nearby hospitals change the conditions of their strike.

– SOS Medecins will not answer your calls during the strike period.

– Every French department has a minimum emergency service in place. You’ll find the number to call on the health section of their website. Their advice is to avoid going to the hospital unless it’s an extreme emergency.

– Cold and flu symptoms aren't considered serious enough to receive treatment at a French hospital during the strike. The same applies to gastroenteritis. Only more severe symptoms such as a very high temperature and blood in the faeces should warrant a trip to the doctor.

– Non-prescribed medication from the chemist is the best option if you do feel under the weather from the 24th to the 30th of December.