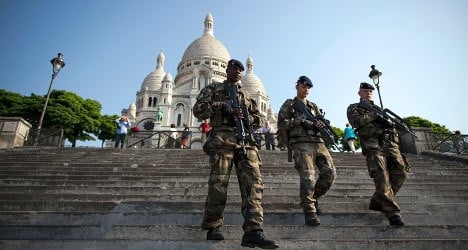 Hundreds of extra soldiers will be on duty across France over Christmas. Photo: AFP

Prime Minister Manuel Valls sought to ease concerns in France on Tuesday over a spate of seemingly unrelated but bloody attacks, saying up to 300 soldiers would be deployed around the country to ensure security.

While the motives behind the incidents — a knife attack on police and two cases of cars ploughing into passers-by — remain unclear, the violence has jarred nerves after repeated jihadist calls for "lone wolf" action in France over its fight against Islamic extremism.

"The number of patrols will be increased during this (Christmas) period. Two hundred to 300 extra soldiers will be deployed in the coming hours" on top of the 780 already on patrol, he said live on television.

Above all Valls appealed to the country to stay together.

'We must fight hatred and intolerance'

“I appeal for unity and national harmony,” he said. “Democracy is never stronger against violence and terrorism than when it respects and promotes its own values. All of our society must mobilize against radical violence and the rise of hatred and intolerance”.

Valls and the Interior Minister Bernard Cazeneuve will travel to Nantes on Tuesday a day after a driver mowed down shoppers at a Christmas market in the city.

Authorities have been eager to stress there were no apparent terrorist motives in Monday night's attack in Nantes, describing the perpetrator as "unbalanced".

And on Sunday a man shouting "Allahu Akbar" drove into pedestrians on the streets of the eastern city of Dijon, injuring 13. There too, authorities said the driver was suffering from a severe psychological disorder.

On Saturday, a man was shot dead by police after walking into a police station in the central town of Joue-les-Tours and attacking three officers with a knife. He too had yelled "Allahu Akbar".

Authorities have for months been on tenterhooks over the threat of violence inspired by Islamic extremism.

In September, the radical Islamic State group that controls swathes of Iraq and Syria urged Muslims around the world to kill "in any manner" those from countries involved in a coalition fighting its jihadists, singling out the French.

Among instructions detailing how to kill civilians or military personnel was to "run him over with your car".

However, while the attack on police appears more likely to have been motivated by Islamist extremism, in the case of both drivers local prosecutors have described the perpetrators as “unbalanced” individuals with a record of psychiatric illness.

The driver in Nantes tried to commit suicide by stabbing himself repeatedly once he had crashed his van and in Dijon the driver had reportedly visited a psychiatric hospital 157 times.

Even if the motive is not terrorism and there is no established link between the incidents there is a concern there may be other copycat acts, especially around the festive season.

"Unbalanced individuals can act. They can be receptive to or influenced by propaganda messages or the power of images," said. Valls.

Thierry Spitz, regional secretary of the police union Alliance, said he was worried about the series of events.

"[Nantes] was an isolated act, once again by an unbalanced person. But that's exactly what worries us a bit. With the media coverage, we risk a repeat of this kind of fact and that is rather worrying," he told AFP.

The government faced criticism on Tuesday that it was minimising the threat, at a time when more than 1,000 nationals are thought be involved in jihad on home soil, or in Syria and Iraq.

Saturday's assailant Bertrand Nzohabonayo was not on a domestic intelligence watch-list but his brother Brice is well known for his radical views and was arrested in Burundi soon after the incident.

Nzohabonayo's mother had also told authorities that she was worried about Brice's radicalisation and "the influence he could have on his brother Bertrand," said Paris prosecutor Francois Molins, whose office is in charge of the probe.

The assailant in Dijon, meanwhile, had taken an interest in religion and started wearing a djellaba — a long robe worn in Muslim countries — just a week ago, according to his mother.