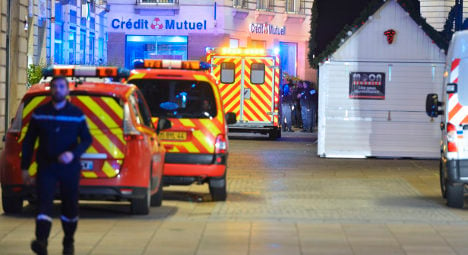 Was the incident in Nantes part inspired by what happened in Dijon? Photo: George Gobet/AFP

A 37-year-old man drove his van into the crowds of Christmas shoppers in Nantes on Monday night, just a day after another driver had mowed down pedestrians on the other side of the country in the city of Dijon.

In all over 20 members of the public were left injured, and one victim of the Nantes attack was pronounced dead on Tuesday.

Authorities have been quick to rule out any terrorist motives, even if the driver in Dijon was heard shouting "God is Greatest" in Arabic (Allahu Akbar) before he mowing down pedestrians.

Prosecutors and the government have also ruled out any link between the two cases or an incident on Saturday,when a man who also shouted "God is Greatest" in Arabic, stabbed two police officers.

While the attack on police appears more likely to have been motivated by Islamist extremism, in the case of both driver rampages, local prosecutors have described the perpetrators as “unbalanced” individuals with a record of psychiatric illness.

The driver in Nantes tried to commit suicide by stabbing himself repeatedly once he had crashed his van and in Dijon the driver had reportedly visited a psychiatric hospital 157 times.

Nevertheless President François Hollande was sufficiently concerned to call an emergency cabinet meeting on Tuesday to discuss the best way to react to the incidents and to make sure authorities are prepared.

Prime Minister Manuel Valls met with several ministers on Tuesday morning to "take measures if they are necessary".

Even if the motive is not terrorism and there is no established link between the incidents there is a concern there may be other copycat acts, especially around the festive season.

Thierry Spitz, regional secretary of the police union Alliance, said he was worried about the series of events.

"[Nantes] was an isolated act, once again by an unbalanced person. But that's exactly what worries us a bit. With the media coverage, we risk a repeat of this kind of fact and that is rather worrying," he told AFP.

Psychiatrist Roland Coutanceau agreed, telling BFM TV: “The media coverage of the events may have the effect of inspiring someone who is ready to act."

“In the Nantes case you can ask the question whether the modus operandi – which can be carried out by anyone – i.e. driving into a crowd of pedestrians, was inspired by the incident in Dijon.

“Maybe the man behind the Nantes attack was moved to act by what happened in Dijon, but his motives and his personality are very different,” Countanceau added.

Criminologist Jean-Pierre Bouchard also noted that the festive season may also have played a role in the two incidents in Dijon and Nantes.

“During the holiday period, when everyone is happy, others are desperate and in trouble. It may prompt them to act,” said Bouchard.

Despite the fears of further acts over the Christmas period, the government is urging calm.

"The best response is to continue to live peacefully with the necessary vigilance of course," said PM Manuel Valls.

But with calls from Islamist extremists to attack France the government is also taking no chances.

After Tuesday's emergency meeting ministers announced that security would be steppe up at police stations around the country.

Whether it's threats from Islamist extremists or acts by "unbalanced individuals" France goes into the Christmas period in a heightened sense of anxiety.