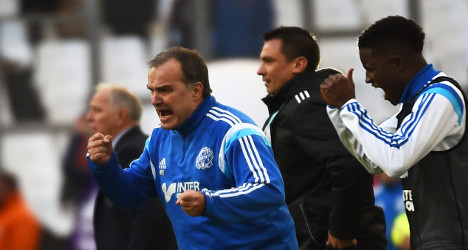 Belgian striker Michy Batshuayi scored the winner as Marseille beat Lille 2-1 on Sunday to ensure that they will top the table at Christmas ahead of Lyon, who hammered Bordeaux 5-0.

Batshuayi secured OM's ninth consecutive home victory, their most impressive run of results at the Stade Velodrome since 1990/91, after Idrissa Gueye had cancelled out the Nolan Roux own-goal which gave the home side the lead.

Marseille, who were last crowned champions in 2010, take the symbolic title of 'Autumn Champion' by a margin of two points from Lyon, who continued their impressive form by destroying Bordeaux on Sunday evening.

OL leapfrog reigning champions Paris Saint-Germain, who are three points off the pace in third after a 0-0 draw with Montpellier on Saturday, with Saint-Etienne in fourth after beating Evian 3-0 on Sunday afternoon.

Batshuayi, who had only been used as a substitute in the league since signing from Standard Liege in the summer, was given the nod by coach Marcelo Bielsa after Dimitri Payet was dropped for an alleged lack of effort in training.

And the Belgian Under-21 international seized his chance in a game watched by a record Velodrome attendance of 62,048 spectators.

"I was especially eager for us to win this game because for five months these players have put in so much effort, so to finish with a deserved victory at home is their reward," said Bielsa, who dismissed talk of a bust-up with Payet.

The France winger had been Marseille's in-form player in recent weeks before surprisingly being sent away on his Christmas holidays early.

"Nothing in particular happened. I simply decided to choose another player today and I didn't think it was necessary for him to be in the squad of 18."

The hosts opened the scoring in the 32nd minute when Roux, in attempting to clear a Florian Thauvin corner, only succeeded in helping the ball into his own net.

Andre Ayew had a shot cleared off the line by Simon Kjaer before Gueye escaped without even a booking after catching Mario Lemina in the face with an arm.

The Senegal international made the most of his good fortune by levelling just after the hour mark with a shot from the edge of the area that beat Steve Mandanda in goal with the aid of a deflection.

However, the hosts sent the massed ranks of Marseille fans — many in Santa hats — into ecstasy in the 69th minute as Batshuayi turned his marker and let fly with a right-footed effort that gave Enyeama no chance.

"I owe a great debt to the coach for showing his faith in me and giving me the starting role," said Batshuayi, 21.

"This is a club dear to my heart and when I scored the goal I let out all the emotion I have had cooped up inside me since I joined. I think I have taken a step forward today."

Meanwhile, Lyon made it four league wins in a row to move above Paris as they outclassed 10-man Bordeaux at the Stade Chaban-Delmas, led by the in-form Lacazette.

Ligue 1's leading scorer smashed home six minutes before half-time to set Lyon on their way and rounded off a stunning victory in the last minute to take his tally for the campaign to 17 goals.

In between, Corentin Tolisso scored early in the second half before Bordeaux were reduced to 10 men when Nicolas Pallois was sent off for chopping down Clinton Njie, and Nabil Fekir and Jordan Ferri added further goals as the hosts capitulated.

Earlier, Saint-Etienne continued their excellent league form by easing to victory at home to struggling Evian.

Max Gradel opened the scoring in the second minute before Romain Hamouma set up Ricky van Wolfswinkel to score his fifth league goal of the campaign.

Hamouma then cut inside two defenders before arrowing a left-foot shot from the edge of the box into the top corner in the second half.

Les Verts are now unbeaten in 10 Ligue 1 games and have gone six matches without even conceding a goal, while Evian end the year in the relegation zone.