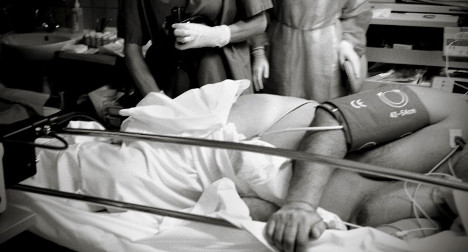 ER doctors are due to kick off the protest on Monday. Photo: Jean-Philippe Ksiazek/AFP

Emergency room doctors are due to kick off the protest on Monday, demanding their work week be reduced to 48 hours compared to around 60 currently, and better overtime pay.

But the stoppage is not expected immediately to impact hospitals as those striking will keep working and merely wear a badge.

From Tuesday, though, the situation will worsen as GPs and specialists will close shop in protest at certain aspects of an upcoming health bill, which notably will allow pharmacists to vaccinate patients — an act that is currently almost exclusively reserved to doctors.

In Paris and its suburbs, hospitals have been ordered to activate a special crisis plan to help deal with the number of people who would normally have gone to a GP but will be going to a hospital instead.

A crisis unit will be set up in each hospital and will meet daily to take stock of the number of people on duty, of potential tensions and the number of beds available.

The strikes will top a week of stoppages in other sectors.

Amazon employees, those working for security company Brink's, and easyJet flight attendants are also planning to go on strike over the holiday.

And since Friday, sales staff at Paris's Eiffel Tower have closed their souvenir stores to demand a pay rise.