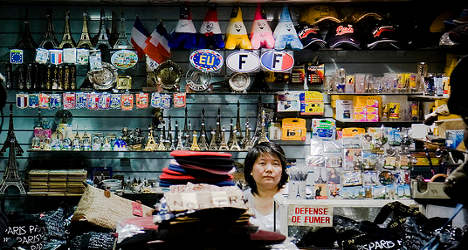 With less than a week to go, the race is on to get all your Christmas shopping done before Santa comes to town. For homebound Anglos, a “Made in France” product may seem like the perfect present to bring home and we won’t argue with the gift-wrapped foie gras, wine or macarons.

Here is a list of some of the most classic French gifts to take home. The famous French bérêt might have helped people make a fashion statement some 50 years ago, but it certainly won’t today. At least not on French streets, where the wearer risks facing both weird looks and giggles. You won’t be doing anyone any favours by putting a bérêt under the Christmas tree… Gold-coloured model of the Eiffel Tower

If you are looking for an original gift, this model of the Dame de Fer (Iron Lady in English) will make you loose all credibility. Yes, the Eiffel Tower is a lovely landmark, but its grandeur is probably best shown off in a framed photograph or a painting rather than serving as a cheap coffee table ornament or as a key ring. A bottle of Beaujolais Nouveau

If you're trying to make an impression by offering someone a bottle of this wine, the receiver would be better off pretending that he or she doesn’t drink wine at all. It’s cheap and has only fermented for a few weeks, so the French drink it more as a joke rather than as part of a fine cuvée tasting. They even make a party out of it. Every November, hundreds of partygoers gather all around the world to get a taste of the infamous Beaujolais Nouveau, which is, needless to say, not very tasty. Does watching a movie about France with accordion music in the background sound familiar to you? Well, make no mistake. Any French person will tell you that listening to accordion music is hardly a common practice in France and may even tell you that it shouldn’t even be that representative of France, since its inventor is reportedly Austrian.

Missing the sound of cicadas that reminds you of that lovely family holiday you spent in Provence this summer? Well buying one of those little boîtes à cigales (cicada boxes in English) is probably not the best way to help your family members reminisce over that time. Hearing them sing all day, every day, will pretty much drive anyone up the wall. Fast and guaranteed.

Yes, cribs are a popular decoration during the festive season in France but do you really want to give someone a present that they can only use once a year? Plus, even if your friends do like cribs what are they going to do with one figurine? The baby Jesus alone doesn’t make a nativity scene. You may have that one male friend who just can’t figure out the Paris metro and you think giving him a pair of boxers with a map printed on them would be the perfect gift. However, unless you want him to shimmy out of his trousers whenever he forgets what line to get on, it might be more appropriate to just opt for a paper map of the city’s underground. Putting the name of the receiver on the bowl doesn’t make it a nice gift. It’s still just a bowl. Browse the artisanal shops in the Brittany region, and you’ll definitely come across Christmas presents that are a little more unique. The “I love Paris” T-shirts may be popular among tourists but there really isn’t a gift that is less unique. You can pick one up at literally every souvenir shop in Paris and every major, and even not-so-major city of the world sells its own version of the shirts. The Charentaise slippers are proof that even the French can commit some fashion faux-pas every once in a while. There’s no doubt that they will keep their owner warm in winter, but let’s be honest here – they’re not the most stylish footwear, even if they are just intended to be worn around the house.