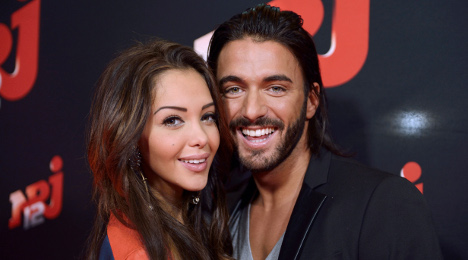 The curvaceous 22-year-old Nabilla Benattia, who resembles the American star who also made her name in reality television, was kept behind bars for five weeks to prevent her from colluding with her boyfriend Thomas Vergara on the facts of the case.

She was arrested in November after a fight with Vergara — whom she met on a reality TV show — in which he received serious knife wounds to the chest.

Benattia initially told police Vergara was injured while trying to fend off an attack by three people, but has changed her story several times.

She now insists her partner, under the influence of cocaine, stabbed himself during a violent argument. Vergara said she stabbed him "in the confusion" of their fight.

While awaiting her trial, expected in the latter half of 2015, Benattia is forbidden from leaving the country or contacting Vergara, even through social media. She has also been ordered to remain mum on the details of the case in the media.

Her lawyer told AFP she would resume her public activities.

Nabilla shot to stardom when remarks she made about a fellow contestant on a reality TV show in March 2013 went viral.

"Hello? I mean hello? You're a girl and you don't have shampoo, hello? Hello!" she said while holding her hand to her head as a mock telephone.

The phrase spawned countless parodies including one video where she calls a visibly irate Hitler, and inspired several ad campaigns, prompting her to have it registered as a trademark.

She went on to front her own reality show called "Hello Nabilla" about her and her family, much like her idol Kim Kardashian before becoming a presenter on an evening talkshow.

To some she is just a silicon bimbo, to others she is a calculating fame-seeker, but nevertheless Nabilla has become a household name in France.

She is also known for losing her temper. In May 2013, for instance, she spat in the face of a train conductor, who filed a complaint against her.