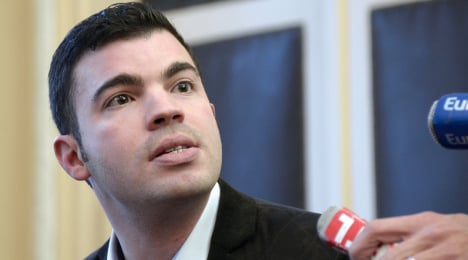 The court said Fabien Engelmann, mayor of Hayange in eastern France, would be banned for a year from the moment he has exhausted all his appeals. Photo: Frederick Florin/AFP

The court in Strasbourg said Fabien Engelmann, mayor of Hayange in eastern France, would be banned for a year from the moment he has exhausted all his appeals.

Engelmann told AFP he would "of course" appeal the decision.

"I have a month to make the appeal. I have a meeting with my lawyers on Monday. The Front National is behind me, (FN leader) Marine Le Pen as well and of course we will appeal," he said in a statement to AFP.

Engelmann is the second FN mayor to be thrown out since the party took 11 towns in municipal elections in March. In October, a court stripped Joris Hebrard of the mayorship in the southern town of Pontet following accusations of electoral fraud.

The cases are particularly damaging for the party as its leader Marine Le Pen had vowed to make the towns under its control models of propriety.

Engelmann's infringement amounted to 1,575 euros ($1,940) that he had failed to declare. The money came from his former running mate and deputy, Marie da Silva, who has since turned against him and claims he is guilty of "fraud".

The 35-year-old former union leader says it was a technical error and blamed a "two-speed justice system in France" that is biased against the FN.

"The charges are false. This decision is scandalous. This coup was prepared in advance," he told French news channel BFM on Friday.

The FN — known for its strongly anti-immigrant stance — has seen significant gains at the polls in 2014, thanks largely to growing disenchantment with mainstream parties.

It followed its record haul at the local elections by coming first in the European Parliament elections in May.