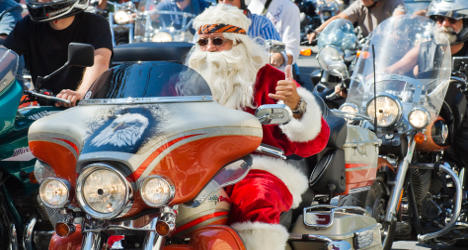 Some 3,000 bikers rode through Paris to support orphaned children of firefighters. Photo of Santa biker: Shutterstock

The annual “Carabalade de Noël” ran through the whole city, from Bercy in the east, past the Place de la Bastille, Place de la Concorde and Trocadero to the west, to finally end at the Eiffel Tower.

“The event was a great success,” one of the organizers Christophe Caramotards, told The Local. “Every year more and more people come along,” he said, adding that around 1,000 more people had joined the ride this year compared with 2013.

The bikers were dressed up in Santa outfits and had decorated their motorcycles with lights, glitter and garlands and brought along presents for orphaned children to firefighters who have died either on or off duty.

“We [the bikers] are very moved by the fate of these children,” he said. “Also, firefighters are very important to the biking community. Usually, they are the first to arrive at the scene of an accident for example.”

At the Eiffel Tower, the bikers were met by members of the 'Oeuvre des Pupilles Orphelins', an association for orphaned children of firefighters and a co-organizer of the event which collected the presents donated by the bikers. They will then sort and wrap them and hand them out to the children. The first ride took place in 2002 and the event has been growing in popularity ever since.

“At the beginning the ride was just for fun,” Caramotards said. “But then more and more people joined. We wanted to put this interest to good use, so we decided to start supporting associations.”

Caramotards said the event has quickly grown in popularity, adding that cities like Toulouse, Montpellier, and Poitiers organize similar events now too.