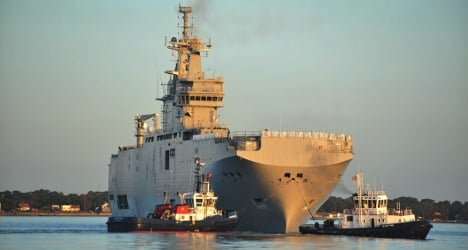 In blue uniform and matching berets, the sailors, who have been training in the port since June, began to board the training ship Smolny which will take them home from the western French port of Saint-Nazaire

A spokesperson from shipbuilder DCNS was quoted by AFP as saying: “I can confirm that the Russian sailors will go back in time for the end-of-year festivities.” However they did not give a date for the sailors’ return.

Last month, French President Francois Hollande pushed back "until further notice" the delivery of the first of the two warships.

"The President of the Republic considers that the current situation in eastern Ukraine still does not allow for the delivery of the first" warship, Hollande's office said in a statement at the time.

"He therefore decided to delay until further notice" the decision on whether to grant the export licence needed to deliver the ship to Russia, the statement added.

The first assault ship — which can carry 16 helicopters, four landing crafts, 13 tanks, 450 soldiers and a hospital — was supposed to be delivered in November, according to the original deal signed in 2011 under Sarkozy’s government.

But as the crisis in Ukraine deepened amid accusations of Russian meddling in the east of the country, Paris came under tremendous pressure from its allies to delay the delivery of the warships.

Hollande faces a serious dilemma over the Mistrals.

France, already struggling economically, could be liable for hefty fines if it breaches the 1.2-billion-euro ($1.5-billion) contract.

But it would also risk the wrath of its allies around the world if it were to deliver the hot-button technology to Russia at a time when Moscow is in the diplomatic deep-freeze over the Ukraine unrest.