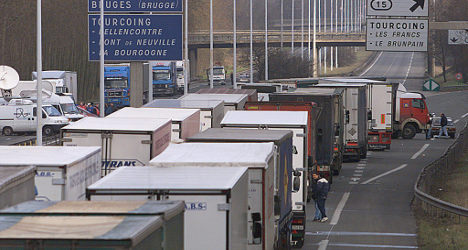 Just in time for the last frenzied weekend of shopping ahead of Christmas, French truck drivers are throwing a spanner in the wheel by blocking some roads and warehouses around the City of Lights – slowing traffic and disrupting Christmas deliveries.

The action, called by the transport worker union CFDT to bump up salaries, is mainly being staged around the Marché International de Rungis – the world’s largest wholesale food market – on the outskirts of southern Paris.

In a statement cited by French daily Le Parisien, the union said it hoped the disruption would briefly “impact the economy” of Ile-de France, and that although traffic wasn’t expected to be paralyzed “there may be some delays”.

“We don’t have 40 solutions, so the mode of action is to block warehouses and roads,” said Thierry Cordier, secretary-general of the union.

The truck drivers are demanding a hike to the minimum salary, from the current €9.53 per hour to €10 per hour.

The blocking of roads or the slowing of traffic is a fairly common method that French unions apply in a move to get their voices heard.

Earlier this week, Parisian taxi drivers held a go-slow on the ring road around Paris to protest against the competition put up by the urban ridesharing service UberPOP.