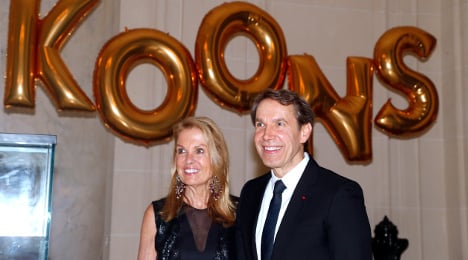 US artist Jeff Koons (R) poses with US ambassador in France Jane Hartley at the US embassy in Paris in November. Photo: Francois Guillot/AFP

Franck Davidovici was the author of ad campaigns for the French clothing brand in the 1980s, famously introducing a little pig to pose alongside models in highly successful, theatrical scenes.

The 1985 autumn-winter campaign showed a young girl lying in snow, apparently the victim of an avalanche, being nosed at by a small pig with a barrel of rum under its neck in reference to the famous Saint Bernard rescue dogs.

Koons's porcelain artwork, which dates from 1988, shows a similar looking young girl, strands of hair on her cheek just like in the ad, though she is wearing different clothes. The pig does appear to be wearing a rum barrel.

A bailiff went to the Georges Pompidou Centre in Paris last week, where a retrospective of the artist's work is taking place, to take a photo of the artwork, said the source, who wished to remain anonymous.

Jean Aittouares, the lawyer for Davidovici, told AFP there would be "legal action" but refused to comment further.

There are four copies of "Fait d'Hiver", and the one currently exhibited in Paris was sold for around three million euros ($3.7 million) in 2007 at Christie's auction house in New York. It now belongs to the Prada collection.

Neither the Georges Pompidou Centre nor Koons were available for comment when contacted by AFP.