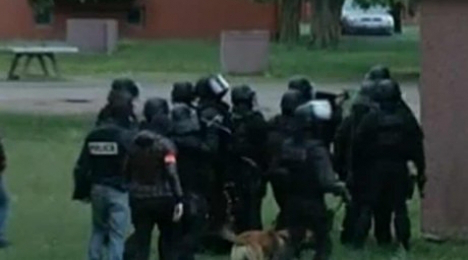 France says it has foiled five terrorism on its territory since the summer of 2013. Photo: Screengrab I-Tele

While jihadists returning from Syria accounted for four of the foiled plots, Interior Minister Bernard Cazeneuve told a cabinet meeting that there were also some instances of homegrown terrorism.

“Since the summer of 2013, the DGSI (French intelligence services) has foiled five terrorism attack projects in the country, involving individuals who had returned to France or who had never left the country,” Cazeneuve said according to the minutes from Wednesday’s meeting.

Although no specific details were given of the actual plots, Cazeneuve said that one suspect had been arrested only two months after returning from a stint Syria. He also said investigators had made several arrests in Marseille after discovering a trove of arms while investigating alleged Brussels museum shooter, Mehdi Nemmouche.

Nemmouche, a Frenchman of Algerian descent, is accused of killing an Israeli couple, a Frenchwoman and a Belgian man in a shooting in Brussels Jewish museum in broad daylight on May 24th.

Cazeneuve also said that a man from Cannes, who had returned from Syria in the beginning of this year, had been arrested on suspicion of possessing arms and explosives.

French broadcaster Europe 1 said that since the beginning of 2014, the number of jihadists with either French nationality or who are living in France has doubled, to almost 1,200.

Of those, around 390 are currently suspected of waging jihad in Syria or Iraq while 231 are believed to be making their way to these war zones. 234 are estimated to have left Syria and 185 are believed to have returned to France.

Cazeneuve said that about a quarter of the suspected jihadists had only recently converted to Islam.