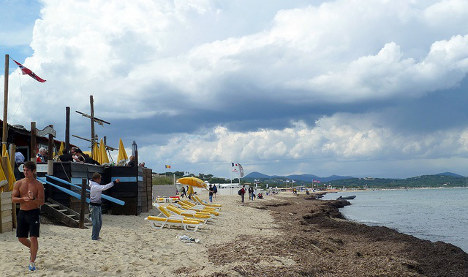 The baby boy's body was found on the beach in the southern French coastal town of St Tropez. Photo: David van der Mark

The body of the boy, called Semyon, was found by a woman walking on the beach, French police said in a statement on Thursday, adding that he was about “one year of age” and had been carried there by the sea.

His 40-year-old mother, from Moscow, last week admitted to drowning her son because she feared he has schizophrenia.

The body was found in the same light-coloured babygro that Semyon was wearing on the night he was drowned, Il Secolo XIX reported.

His mother was arrested in the Ligurian coastal town of Bordighera last Thursday after her friend reported the child’s disappearance that morning.

CCTV footage from the hotel showed the woman leaving at around 2.00am in the early hours of Thursday morning. She was then seen returning to the hotel two hours later without the child.

She admitted to driving around 20 kilometres along the coast to Bussana, but first told investigators that she left the child on the rocks. She then admitted to throwing the baby into the sea.

She later changed her story, saying that she took the baby with her into the sea in a sling and drowned it. The woman, who was taken to prison in nearby Imperia, said that she feared that her son suffered from schizophrenia like her mother.