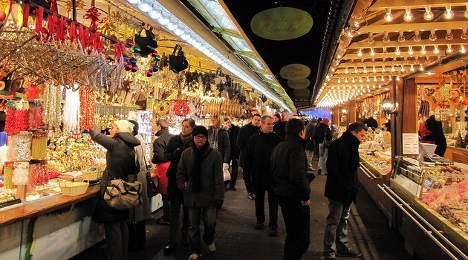 Do the French really not care about Christmas? Photo: AFP

Christmas season is already on its way and yet, it seems that the French are not looking forward to it. Well, at least according to a recent survey by YouGov in the UK, which indicated that 57% of the French are not excited about the festive season.

According to the survey, 81% of the French questioned think that Christmas has become too commercial while for 76% of them, the real meaning behind Christmas has been lost.

So is it true the French have really fallen out of love with Christmas?

“I think people are less enthusiastic about Christmas than before since it has become very commercial. It is all about adverts for gifts that you see in shops very early on in the calendar now, rather than spending time with your family as we used to do before,” Elisabeth Maire, a 63-year-old personal assistant told The Local.

“There is also the fact that it is the end of the year and this time can be quite depressing for some of us.” she added.

But if you judged it by the number Christmas markets around France, where the vin chaud is free flowing as well as the hordes descending on Galeries Lafayette every evening, you 's think the French were bang up for Christmas.

The poll does suggest however that a financial factor could explain this lack of enthusiasm towards Christmas for many French households. According to the survey, 68% of them indicated that their financial situation has deteriorated in the past twelve months.

“Christmas has always been and will remain a family and institutional holiday, but nowadays with the crisis, it has become very difficult for some families, including mine,” Claude, a head-hunter and father of two, told The Local.

"I am looking forward to this holiday and will celebrate it, but this year, I will give less presents away than I used to in the past, for sure,” he added.

You could also question whether France’s fundamental principle of secularism played a key role in the survey’s significant negative response towards the historically Christian festival.

Does the fact children in French schools do not learn about the nativity play and that authorities in France don’t allow the Baby Jesus and the shepherds to be displayed in public spaces all takeaway from the Christmassy feel?

It's doubtful. In France like in many other countries, it’s been a long time since Christmas was really a religious festival.

Thierry Vidor, the director general of the charity Familles de France told The Local: “Christmas in France is not a religious holiday anymore, it is a family one.”

“Many families celebrate it as a sort of birthday since they can only gather all together once a year. It is the recognition that family is the base of society and that it is renewing continuously.”

The same YouGov poll also revealed that 52% of the younger interviewees are still very much looking forward to the idea of a family gathering, particularly amongst the 18 to 34 age group.

That was backed up by young French people who The Local spoke to this week.

“It is always nice to see your entire family gathered, your grandparents, aunts etc. and celebrate Christmas together. And on the contrary, we are really looking forward to this occasion since we are students now and not always available to spend time with our families. So gathering at Christmas time makes us feel good,” Amandine, a 21-year-old student told The Local.

So it seems the French may not be that big on Santa and shopping but they are still very much into festivities with their family.

Perhaps it’s a far more positive and mature approach to Christmas? So it's best just to ignore the polls.