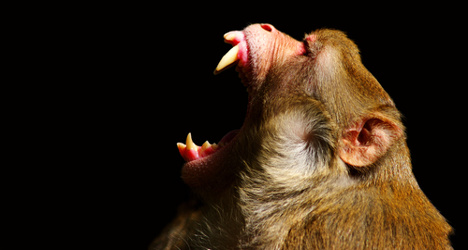 An aggressive monkey fed on a diet of Kinder chocolate has been terrorizing Marseille. Photo: Shutterstock

For several weeks the monkey had been provoking panic in Castellanne, a northern suburb of Marseille, La Provence newspaper reported.

At one point it even entered a primary school where “it caused bedlam and scratched some of the children” before heading to a senior school where it also left students frightened.

Worried residents have been bombarding police with calls to alert them to the presence of the monkey, that reportedly measured 80cm in height.

“We were given the location but by the time we turned up, it had disappeared. It happened every time,” a policeman told the local newspaper.

According to reports the monkey was abandoned among local youths, with whom it spent most of its time.

It was abused by some of the youths and rather than being fed appropriate food, it was kept on a diet of Kinder chocolate.

All of which could explain its aggressive attitude and why locals were making so many panicked phone calls to police.

Traps were set to try and catch the animal but to no avail.

Finally, after getting one distress call the police located the monkey but as they tried to detain it, the animal bit one of the officers.

So a Taser gun was brought out to neutralize it.

“This is the lesser evil, as we didn’t want to kill it,” an officer told La Provence.

A criminal investigation has been opened up over the “illegal possession of a wild animal”.

But this may not be the end of the story of monkeys terrorising Marseille.

Police say there are rumours that there is more than one of the animals on the loose.

IN PICTURES: The most dangerous animals found in France