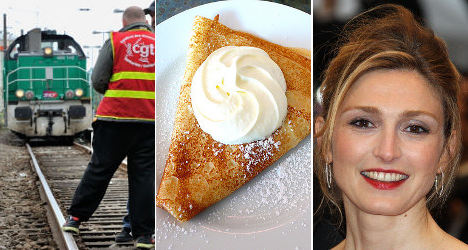 What the web tells us about the French in 2014.

As 2014 draws to a close, we’ve taken the raw stats – the most viewed, the most commented, the most searched, the most tweeted – formed conclusions and narrowed it down to the most telling information.

So what does the internet tell us about the French in 2014?

If you don’t believe us, ask Google. The most searched recipe by French users this year was none other than pancakes. So the next time your French friend brags about how naturally gifted he or she is when preparing Nutella pancakes, check their internet history.

The most frequent ‘how’ question by Google users in France was “How do I cast a blank vote?” So-called protest votes have only been legal in l’Hexagone since April, which perhaps explains why so many French people were searching for answers. From now on French citizens wishing to abstain (a lot by the looks of it) will have their blank votes counted in the ballot.

3. The French are however obsessed with their President.

Mr Hollande shouldn’t flatter himself just yet. He was the second most commented ‘subject’ on Facebook in France as well as being the most searched for politician on Google France. His mistress Julie Gayet was the most searched actress on Google (above the likes of the late Robin Williams and Jennifer ‘leaked photos’ Lawrence). Keeping in mind that Hollande received a feeble 12 percent approval rating in a November survey by pollster YouGov, not much being said about him can be good.

The same goes for "selfie", "swag", "hipster" and even "thug" (fortunately not YOLO). The French are asking Google to offer them translations of these trending English ‘web words‘ more than any other term they don’t understand. They may have the lowest English proficiency level in the EU, but they’re definitely trying.

They don’t understand why there are train strikes.

They happened a lot in France in 2014 but rather than asking Google when the next strike would be the French asked ‘pourquoi?’ (Why?). And it does make sense. One month it’ll be ticket inspectors striking, then it’ll be the unions, all with their own specific set of requests which frustrated travellers may find had to get their head round. The big summer rail strike that saw France's train network grind to a halt confused the public as much as angered them as none of them seemed to know why it was happening.

French kids watch cartoons online. Nowadays toddlers use an iPhone better than you do so this may come as no surprise. The third and fourth most watched YouTube videos in France in 2014 featured a brown cartoon bear (Petit ours brun) with 16.4 million views, and some other smiley animals called The Titounis. Whether it’s the kids loading the videos we don’t know, but the internet certainly offers them the chance to watch their favourite cartoons immediately, which 99 percent of the time is exactly what they want.

The French talk sport on Twitter rather than in the pub. We don’t know for a fact but there were a staggering 672 million tweets under the hashtag #CM2014 (Coupe du Monde) during Brazil’s football World Cup. Other sporting events such as Roland Garros, the Tour de France and the Winter Olympics in Sochi got stacks of commentary on the microblogging site. Whatever happened to shouting abuse at a TV screen when the game is on?

When it came to Google search terms for TV shows there was only one genre that came out on top. The most searched for show on Google was the French reality hit Secret Story 8, followed by French reality show Rising Star and then French reality shows Koh Lanta and Les Anges 6. They’re keeping reality in 2014 our Gallic friends.

Perhaps not surprising this, given that the whole world is watching it, but Game of Thrones was indeed the most popular TV show of 2014 if Google search terms are anything to go by. In second place came Plus Belle La Vie and then then Walking Dead, Pretty Little Liars and Vampire Diaries.